In two weeks, it looks like iPhone and iPad owners will have access to Street View in Google Maps only it won’t be through a standalone app but rather it will be available through Google’s web-based Google Maps.

According to The New York Times, courtesy of iDownloadBlog, Google will implement Street View into the web-based Google Maps in two weeks time. The report does not mention exactly when the feature will arrive.

This means that those who own an iPhone, iPad or iPod touch will be able to have access to Street View, even without access to a Google Maps application. 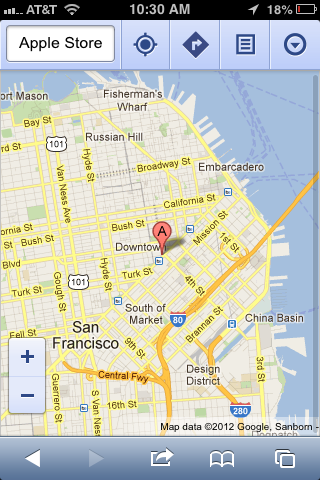 Street View in Google Maps is apparently headed to the iPhone and iPad through the browser.

Right now, the only way iPhone, iPad and iPod touch owners can access Google Maps is through the web. By going to maps.apple.com, iDevice owners get access to a web version of Google Maps that includes several features that are missing from Apple’s Maps which replaced Google Maps as the native maps application iOS 6.

The web-based Google Maps include both bike routes and transit directions, neither of which is available in Apple’s Maps. And while Street View is not yet available, it appears that the feature will be coming soon.

Street View of course is a feature that lets users get up close and personal with city streets, buildings, and more.

With the arrival of iOS 6, Apple’s Maps replaced Google Maps as the native maps app on Apple’s mobile devices. And while highly touted by Apple, the maps haven’t sat well with users as they are littered with misinformation and bugs.

Apple has promised to improve the software over time and users are encouraged to submit errors that they find in an effort to improve the apps. The implementation of these changes will likely be slow, however.

Google is rumored to be working on a standalone Google Maps app for the iPhone and iPad though it’s not supposed to be out for several months. In the meantime, iPhone and iPad users can use the web-based Google Maps service or take a look at some viable alternatives.