While it had been rumored in the past that poor sales of Samsung’s current Galaxy S4 flagship may lead the company to unveil the Galaxy S5 early, this may not be the case. Korean language iNews24 is reporting that according to Samsung head JK Shin, worldwide sales of the Galaxy S4 now exceed 40 million units. The handset was launched last spring.

The handset was unveiled to much fanfare in New York City in March and became available in late April. After two months of availability, Samsung had announced that it had sold over 20 million units.

And although 40 million units sold is a good number, it does show that sales of the handset is slowing down. In the next four months, Samsung moved another 20 million compared to just 20 million in the first two months of availability. 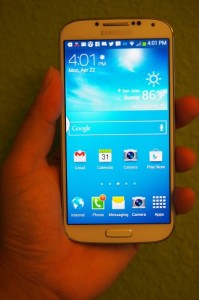 The handset was unveiled with competitive specs in a highly competitive market where Samsung was pitted against smaller rival HTC and is One flagship. The Galaxy S4 has a 1080p full HD display and a quad-core Snapdragon 600 processor in the U.S. However, given the fast changing pace of technology, the Galaxy S4 is now facing competition from newer handsets introduced by Sony, LG, and others with better specs, including a faster Snapdragon 800 CPU and future-proof technologies like LTE-Advanced ready, like on Samsung’s Galaxy Note 3. Additionally, Google will soon unveil its new Android 4.4 KitKat OS, which could make the more dated OS on the Galaxy S4 seem stale.

Earlier, it was rumored that slumping sales of the Galaxy S4 may force Samsung to reveal its Galaxy S5 earlier than usual. The Galaxy S5 was rumored to be announced in January and could arrive at or around the time of Mobile World Congress in February. This would be highly unusual for Samsung since the company has centered its flagship smartphone launch in the spring in recent years.

When the Galaxy S4 was announced, Samsung had ambitious goals for the product with expectations that its flagship would sell 100 million units. At the time, the outgoing Galaxy S3 was doing well with 60 million units sold.

Samsung’s flexible display phone, called the Galaxy Round, may also give the Galaxy S4 and new Galaxy S5 some competition.