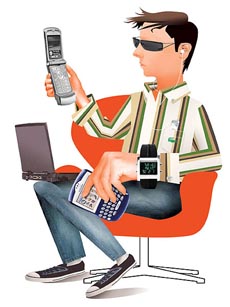 Technology is becoming the college student’s best friend.  From tablet pcs and flash drives, to cell phones and iPods and scientific calculators, Best Best and their parent’s credit card are a match made in heaven.

Checkout this article from Post-Gazette.com on today’s student and technology. Image by Daniel Marsula, Post-Gazette

College students have become the creme de la creme for electronics makers and retailers. They are expected to spend more than $10.5 billion gearing-up for campus this year, according to the National Retail Federation.

Back to school isn’t what it used to be 20 years ago when a Sony Walkman cassette player and a leather day planner were considered high-end accessories.

Today, top-notch technology — such as the wireless Compaq Tablet PC that Chatham College is distributing to incoming freshman for the second year — is required in some classrooms.

Chatham freshmen walked away with their computers for less than half what it’s retailing, thanks to a $530 “technology assessment” fee tacked on to their tuition bill. Still, sales of laptop computers and the other electronics must-haves such as digital cameras, flat screen televisions, flash memory devices and Sony Xboxes, have pushed this year’s spending on back-to-school electronics up more than 27 percent from last year.