The latest iPhone 6 concept features a wrap around display and several amazing features, but it’s not based on science fiction — it’s based off of an Apple patent.

That’s right, the iPhone 6 concept shown in the video below is brought to life from drawings and details that came straight from Apple labs. Apple earned a patent for an iPhone with a wrap around display earlier this year, and now we can see what it might look like if Apple used it as the template for the iPhone 6.

T3 prepared a iPhone 6 concept video render of an iPhone with a wrap around display, and fills in some holes from the filing to show how users could use the second display. Check out one of the best iPhone 6 concepts yet.

The iPhone 6 concept in this video shares several characteristics with the iPhone patent Apple filed, and T3 adds a feature or two to the mix.

If Apple is planning to deliver an iPhone 6 with a wrap around display it’s important to remember that the likely iPhone 6 launch would be over a year in the future, which provides opportunities for advances in flexible displays, though we may need to wait longer for everything to fall into place. 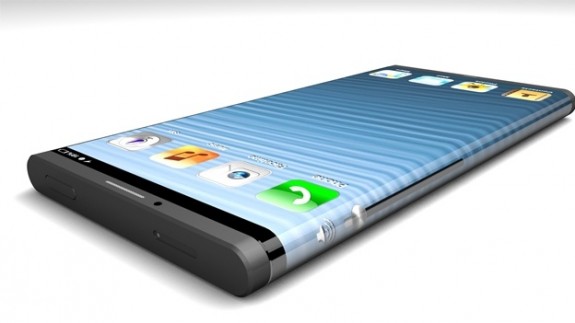 This iPhone 6 concept shows a wrap around display based on an Apple patent.

The iPhone 6 concept features a 1615 x 1800 resolution wrap-around display, an upgrade from the 1136 x 640 resolution on the iPhone 5. This display wraps around the left edge of the phone, which is where gesture controlled buttons replace the mute switch and volume buttons. This feature comes straight from the application.

Other uses of the screen include iOS multitasking with one app on each side and the ability to view wrap around panoramas on the curved display. These features are interesting, but a user still couldn’t see the full panorama or use more than one app at a time.

This wrap around display offers opportunities to change how users interact with the iPhone 6, and in the video we get a look at one way this could happen. While playing a soccer game, the back of the iPhone 6 becomes a controller. 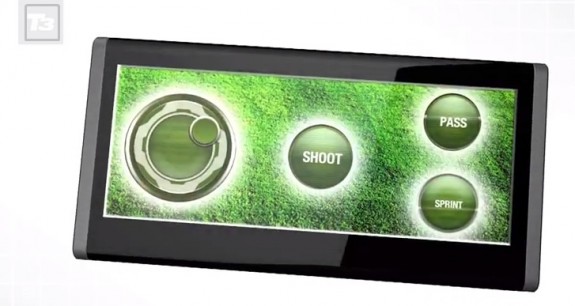 The back display could become a controller for games, leaving the front of the device open for watching the game.

This allows the user to see the entire game and still control players. This is troublesome in that it could be hard to find virtual buttons, but if Apple could pair this with Tactus technology which pops out a physical button on demand, then we would be on to something.

Flexible displays are still a work in progress, but Apple and Sharp are reportedly working on an iPhone 6 display and Sharp showed off a flexible screen at CES 2013. Additionally stronger glass is being designed to deliver a virtually unbreakable smartphone screen, something an all glass iPhone would require.

The iPhone 6 is likely set for 2014. One recent analyst report claims the iPhone 6 is “delayed” until at least June 2014, though it is not clear from when it is actually delayed.