After months of previews and profiles, the Office 2016 for Mac release has finally arrived for owners of Macs, MacBooks, MacBook Pros and iMacs.

Microsoft revealed that today was the Office 2016 for Mac release day earlier today in a post on its Office Blog, months after it publicly began testing the upgrade and features. Office 2016 for Mac is an update for the standard version of Office that millions of people around the world use to create documents, track expenses in spreadsheets and create presentations. 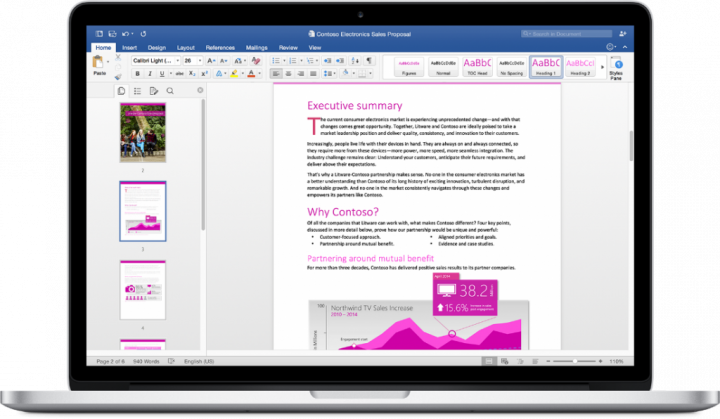 The versions of Microsoft Word, Microsoft PowerPoint, Microsoft OneNote and Microsoft PowerPoint finally look and behave like the Office for iPad apps that Microsoft revealed and released at an event last year. The Ribbon that holds each of the important commands like text formatting now blends with the header. White tabs put the focus on the options available to you. It sounds like a small feature change, but it’s really noticeable and helpful.

The Office 2016 for Mac release also brings with it some serious co-authoring upgrades. Going forward, Mac users can rely on the sweet to create documents, slideshows and more with one or more people without the help of extra software, services or emailing with their team back and forth. Office 2016 for Mac tracks changes and makes it clear to the people working that someone else is in the document. This release also includes native support for Microsoft’s OneDrive cloud storage service. The Microsoft Office apps for Windows already allows users to set their OneDrive account as the default place to store whatever they create, but Office for Mac didn’t. Having this is important when you’re using the Office for iPad and Office for iPhone apps in tandem with a Mac or PC. Achieving the broad compatibility with all the other Microsoft Office for other platforms was a big focus for this release.

Apple added full-screen app support for Macs so that users could put the focus on one task they are trying to complete instead of getting distracted by other things. All of the Office 2016 for Mac apps are now capable of going fullscreen. Included in the update is support for the Multi-Touch gestures that every MacBook has and every Mac can get with an accessory. Microsoft has added support for Retina displays too. Without it, previous versions of Microsoft Office looked a bit blurry on Macs equipped with a Retina display.

Office 2016 for Mac includes five upgraded applications stuffed full of changes in total. Word for Mac has a new Design tab that sticks formatting and customization options in a single place. Microsoft says is added threaded comments to make collaborating on documents easier.

Excel for Mac now includes chart and graph previews, auto-complete and PivotTable Slicers for helping better manage large amounts of data. Microsoft says the feature also lets Excel users discover patterns in their data. PowerPoint for Mac has a refreshed Presenter screen that gives uses a view of what slides are next, how much time they have until their talk is complete and a new animation designer.

Outlook is relatively new to the Office for Mac experience. This version supports email, contacts, calendar and tasks all from one app. Microsoft says it improved threaded emails so it’s easier to keep track of what’s going on. Message previews let users get an idea of what’s in an email before they open it.

Finally, OneNote for Mac has better search and improved tags. It has also picked up sharing so that users don’t have to share notes with their friends, family and colleagues the old-fashioned way.

An Office 365 subscription costs as little as $6.99 a month and includes unlimited Skype calling to phones and OneDrive cloud storage. Microsoft offers free trials of the service to everyone and steep discounts to students through its Office 365 website.