Success in the iPhone Ordering Flap?

So, I took Dwight Silverman’s advice on Twitter and tried to reserve an iPhone for pickup using the new Apple Store iPhone app. I had tried this earlier today and it didn’t work. Actually I tried it twice more. The first time I thought the App had kicked me out of the process rudely, but later I received an email confirming my reservation. It told me that I’d have a shiny new 32GB Black iPhone (thank goodness I don’t want the white one) waiting for me at a price of $699.

Yikes. I didn’t want that as I qualify for the discount at the $299 price. So I canceled that order. A few minutes later I tried again and once again I felt like I was kicked out of the App without so much as a how do you do. A few minutes later I got a confirmation email and this time it listed no price whatsoever. (photo below) I’ll hang on to this reservation until things settle down and check on the pricing. My suspicion (and I may be wrong)  is based on the way the App performed on these two last attempts. The earlier attempt this morning got the churning that I and others are seeing on the website when Apple tried to connect with AT&T. These two times that didn’t occur. That leads me to believe Apple  is bypassing AT&T for reservations through this App and is planning on working out the details when customers pick things up in the store.

Of course, that means that the server mess needs to get straightened out by then, or you might want to bring along some extras reading. 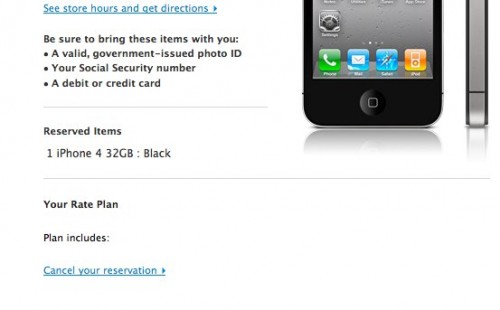