There were some interesting things going on in the mobile tech world this last week on many fronts. Much of what happened we chronicled in one way or the other here on the pages of GBM. But there were several articles that are worth point out that make very good Sunday morning reading (or viewing) that in one way or the other had context, and a bit of depth to the world of mobile tech. 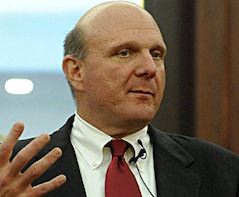 The first article to share is perhaps Steve Ballmer’s final interview as CEO of Microsoft. Conducted by Mary Jo Foley, the article appeared in Fortune. Foley promises there’s more to share, which she will be doing on her blog, All About Microsoft on ZDNet. Ballmer and Microsoft are all about shaping his legacy as he prepares to leave his post, and that’s certainly to be expected. Foley’s piece is well done and shows, as have some others, a bit of the human side of Ballmer. Certainly it must be acknowledged the role he’s played in shaping the tech world during his tenure at Microsoft and this interview, as well as the follow up pieces are probably worth hanging on to as context. Or are at the very least, worth a read.

This second link is actually a video. Tim Cook, Apple’s CEO was recently honored by his alma mater with the Auburn University’s College of Human Sciences Lifetime Achievement award. At the ceremony he spoke and spoke out quite powerfully about his early childhood in Alabama and “the devastating impacts of discrimination” he witnessed, including the cross-burning at the home of a neighbor. The video and Cook’s words explain the impact better than I could, so I urge you to watch it.

We don’t often get to hear or see the private side of these very public figures or peek behind the images that are created and cultivated by and for tech executives. Granted, I’m sure both of these two men have chosen their words quite carefully. But there is a human side to both that comes out and when we do catch those glimpses, I think it is important for us to pay some attention.

This third link is from The Verge and it concerns the NSA and privacy issues. Called, The NSA is out of control and must be stopped, you can guess the case that is made. There’s no questions there needs to be some change. One way or the other, this is going to be one of the big issues of the next few years and bears watching for multiple reasons. It’s worth a read.