Only one link in this Sunday morning reading column and it is a fun one. The Huffington Post reminds us that 50 years ago, noted scientist and science and science fiction author Isaac Asimov published an article in The New York Times called Visit to World’s Fair 2014.  Asimov talked about some predictions for what we’d be seeing in 2014 and some of those predictions were pretty much on target. The Huffington Post scores Asimov’s predictions and the results are pretty good for the prolific author. 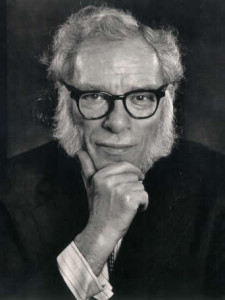 Areas that he got things right include audio and video communication, how we use displays, the way we use tablets and other electronics for reading documents, and of course robots. (He predicted we wouldn’t quite be there yet, but getting closer.) The scoring and the original document are both worth a read as we get closer to a world where science fiction of old meets the reality of today.

Gadgetry will continue to relieve mankind of tedious jobs. Kitchen units will be devised that will prepare “automeals,” heating water and converting it to coffee; toasting bread; frying, poaching or scrambling eggs, grilling bacon, and so on. Breakfasts will be “ordered” the night before to be ready by a specified hour the next morning. Complete lunches and dinners, with the food semiprepared, will be stored in the freezer until ready for processing. I suspect, though, that even in 2014 it will still be advisable to have a small corner in the kitchen unit where the more individual meals can be prepared by hand, especially when company is coming.

Too bad his predictions of not having electric cords for appliances hasn’t come true yet though.

Although technology will still keep up with population through 2014, it will be only through a supreme effort and with but partial success. Not all the world’s population will enjoy the gadgety world of the future to the full. A larger portion than today will be deprived and although they may be better off, materially, than today, they will be further behind when compared with the advanced portions of the world. They will have moved backward, relatively.

I think he’s talking about broadband coverage in the US. And then there’s this:

Even so, mankind will suffer badly from the disease of boredom, a disease spreading more widely each year and growing in intensity. This will have serious mental, emotional and sociological consequences, and I dare say that psychiatry will be far and away the most important medical specialty in 2014. The lucky few who can be involved in creative work of any sort will be the true elite of mankind, for they alone will do more than serve a machine.

No wonder we keep focusing so much on content consumption. The entire article is worth a read.