Looking for a no frills Bluetooth speakerphone? The SuperTooth Buddy is a great option: simple, reliable and it lasts. I tested one on my recent Southeastern US road trip and the device impressed me. I don’t look for a speakerphone that can do  things like stream music to my car stereo wirelessly, or even via an auxiliary jack. I honestly don’t care about extras other than these:

I got all of these with the SuperTooth Buddy. 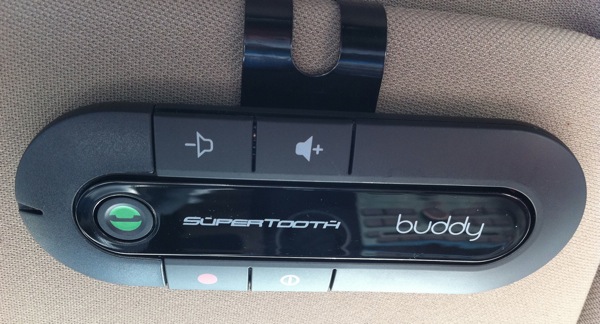 The size of a flat Snickers bar, the SuperTooth Buddy attaches to a visor clip due to a powerful magnet on the back. This system makes it easy to remove, so you can take the speakerphone with you to another vehicle, or charge it, without having to remove the very rigid visor clip. Just grab it and plug it into the included AC/DC converter with the USB cable and rest on the dash, or leave it in the cup holder. The cable plugs into the back of the SuperTooth Buddy. This way you don’t have a long USB cable strung across the dash and up your windshield. 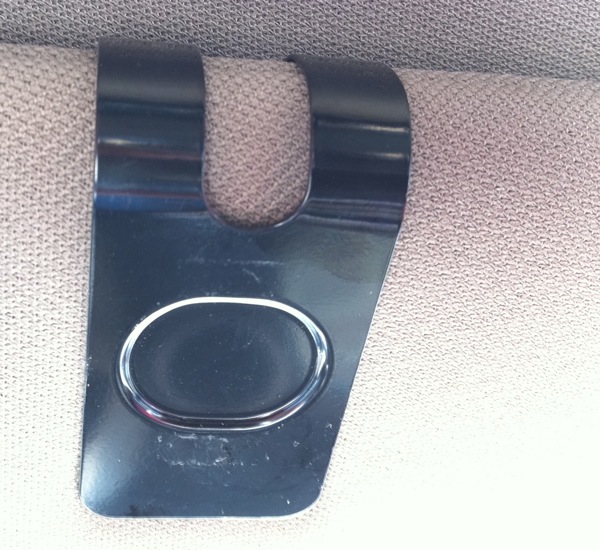 The SuperTooth Buddy is small enough that when connected to the visor it’s out-of-the-way. The black plastic housing is solid and rounded on the ends. The strong magnet lets the clip firmly grab hold of the visor without being loose.

There are two volume up/down buttons on one of the long sides.  The green multifunction button is on the end closest to the mic for answering or starting a call. On the other long edge there is a power button to turn the device on/off and a red end button to stop a call. The multi-function button, though, makes that red button somewhat superfluous.

The designers put the USB port on the back with the magnet, which makes it impossible to plug the SuperTooth Buddy in while attached to the visor because the plug lies flush with the visor when attached to the clip. Since the SuperTooth Buddy is so easy to remove from the clip that is not a big issue, but the location might be inconvenient for those who want to use it clipped to a visor and charging at the same time.

While it is easy to pull the speakerphone off of the clip’s magnet, it is not so loose that it will fall off. The magnet is strong enough to keep it in place, but not too strong.

The speakerphone was easy to install and set up. Just slide the clip on the visor and attach the speakerphone to it via the magnet. Pairing was simple and once paired it automatically reconnects each time you get back in the car. Automatic reconnection works great. My previous Motorola speakerphone had to be re-paired half the time.

If you have two phones or two people each with their own phone who often drive your car, then having the ability to pair two phones is handy. I carry two cell phones, so I liked this feature a lot.

To pair, just hold the ON/OFF button until the indicator light starts blinking alternately red and blue. Enter 0000 on the phone and you’re done. I had no problems paring an iPhone and an HTC Thunderbolt. In fact, on my iPhone I did not have to enter the code.

The speakerphone promises 20 hours of talk time and 1,000 hours of standby time. While I haven’t timed it, the battery lasts. I’ve charged it once in three weeks of use. I don’t make a ton of calls, but the battery still has maybe five hours of talk time and over three weeks of standby time. That makes the problem with the location of the USB port just about moot since you seldom have to charge it. I charged it up overnight when I first got the device and have not charged it again. 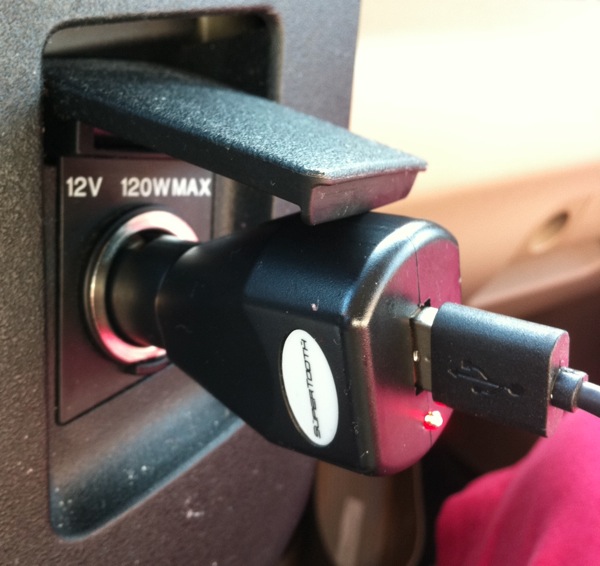 Incoming sound is extremely strong. I had to turn it down to about half volume to keep from being blown away.

At $69 direct, the battery life, simple installation and very good call quality make this a strong product and I can recommend it without hesitation. Amazon has the device for just $41, which makes it an even better value.