If you’re old enough you remember carrying around a boombox on your shoulder to play the radio, cassette tapes and eventually CDs. The SuperTooth Disco is the boombox for the mobile generation with nice sound, convenient wireless Bluetooth connection and great battery life. 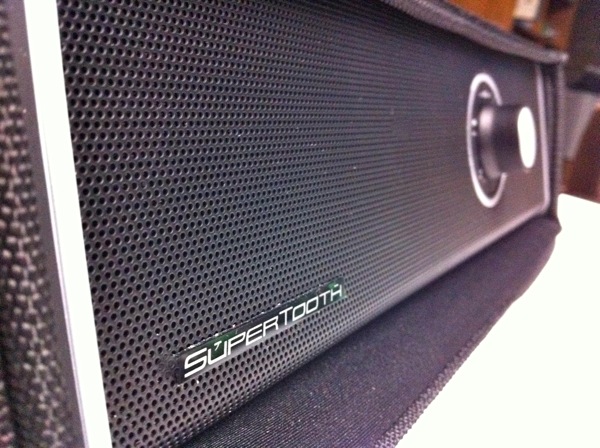 I tested the SuperTooth Disco over the past month, using it at home, the soccer field, my office and on the beach. It worked great in every situation. Thanks to the long battery life you don’t have to worry about an AC outlet. Easy Bluetooth pairing means you don’t lose a connection or have to work to set things up each time you want to listen to some tunes.

The device is a foot long speaker with a center dial for sound volume and buttons around the dial for controlling the media player app on your device with play, pause, forward and rewind. The power button also serves as the Bluetooth pairing button. The other button turns on and off the bass boost feature, which provides a richer sound. With both an iPhone and an HTC Thunderbolt, the control buttons worked well. Audio apps responded quickly when the buttons were pressed. 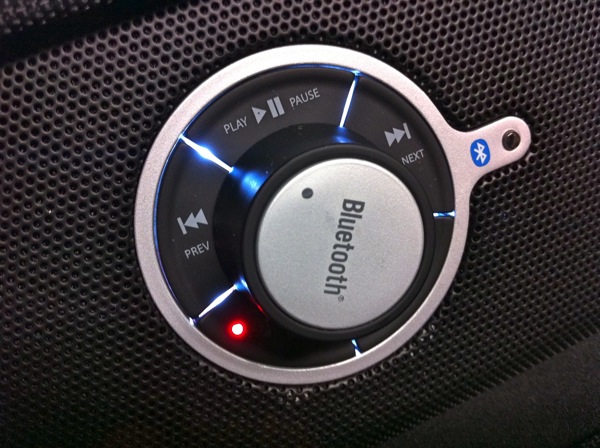 An auxiliary “audio line in” input on the back allows connection of traditional media playing equipment. The 12 watt subwoofer speaker on the back gives the hearer a little of that thumping bass sound, adding depth to the audio. Two 8 watt speakers fill a medium-sized room and even a small portion of a beach or your whole yard. The speakers fill most outdoor settings because they are loud enough, but won’t distort when you turn up the volume.

A nice nylon carrying case protects the system from light rain, dirt or sand depending on the environment. The velcro flap covers the speakers for protection while storing and opens for use. 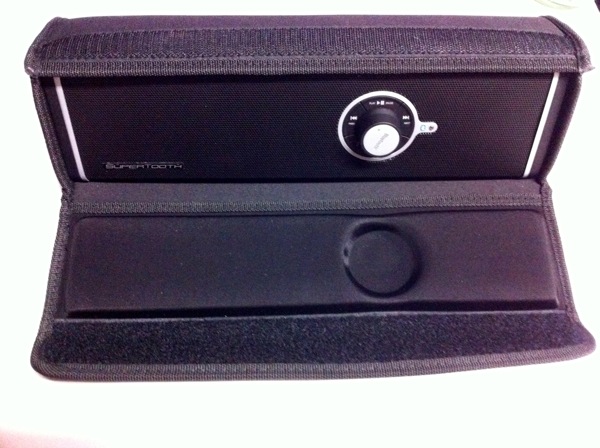 The charging AC adapter could be more convenient if the metal prongs would collapse for easier storage like many mobile AC adapters do.

I like the rich bass and faithful sound. You can blast your friends with the volume or let it waft lightly around the room due to a wide range. We annoyed our fellow sun bathers at the beach when we tested out the full volume of the SuperTooth Disco system. Fortunately, you can turn it down and enjoy your music with rich sound at the lower end of the spectrum. 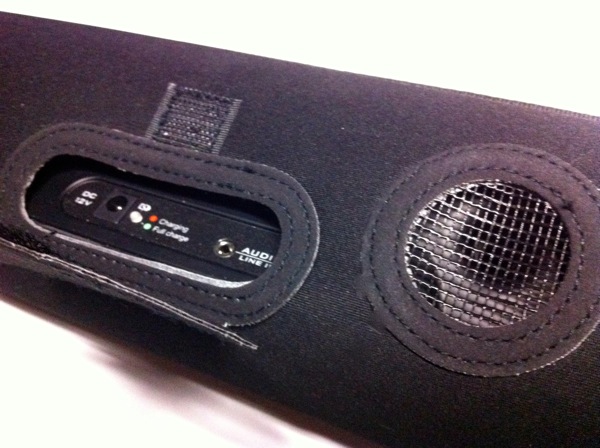 Despite being a Bluetooth audio connection, the sound quality was pretty good. The SuperTooth Disco is not a high-end speaker system, but for a portable wireless system it definitely offers above average quality that fills the environment without distorting.

I don’t think a manufacturer should market their speaker system as wireless if power cord is needed to run. The SuperTooth Disco is truly wireless with a long-lasting battery. Charge it up and connect your iPhone or Android phone via Bluetooth and this great portable solution lasts all day long. We used it at the beach for about three hours, in a hotel room for a few more hours over a two week period and then at the soccer field for about 30 minutes after we returned home from our vacation and the low battery indicator light never glowed. SuperTooth promises 3-4 hours on full volume and 10 hours on medium. We used it for about seven or eight hours and still haven’t drained the battery. Stand-by time is rated at 500 hours. Charging takes about 3-4 hours. 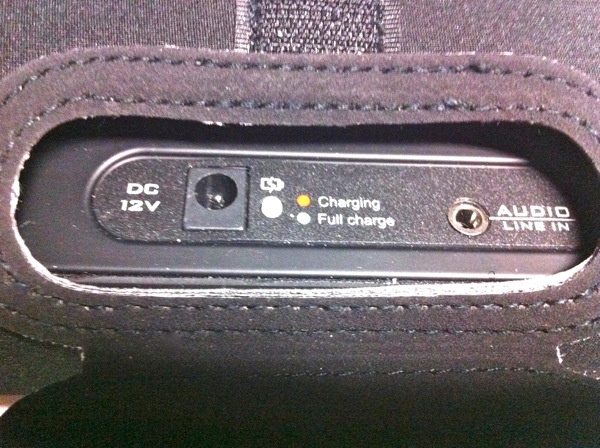 This is the third portable audio system of this kind that I have tested. The first was a great system – the iHome iP46. It also runs on battery-power, but was designed for Apple products. It is about the same size as the SuperTooth Disco sounds as good with similar battery level. The iHome’s primarily connects to iPhones or iPods through an Apple dock connector. You can also connect devices to the speakers through a stereo cable. 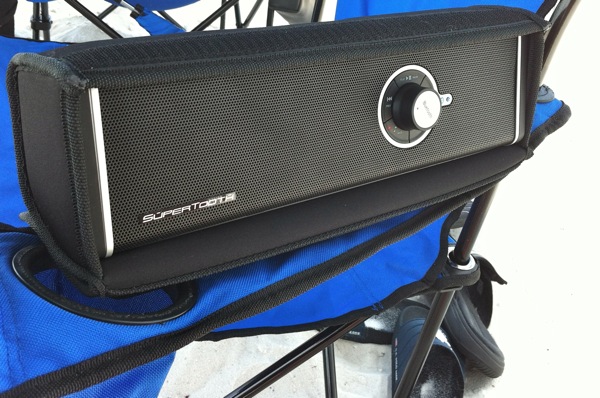 The SuperTooth Disco was a great beach Bluetooth "boombox"

We also tested the smaller iHome iDM12 speaker system that adds the convenience of Bluetooth to the battery-powered portable speaker system. It is half the size and the sound quality suffers a little. Without a subwoofer on the iDM12 sound will not be as rich as the SuperTooth Disco and the battery life is shorter.

The SuperTooth Disco wins my recommendation over the iHome iP46 because the SuperTooth’s Bluetooth capability.  The SuperTooth wins over the smaller iHome iDM12 because it sounds better and lasts longer on a single charge. 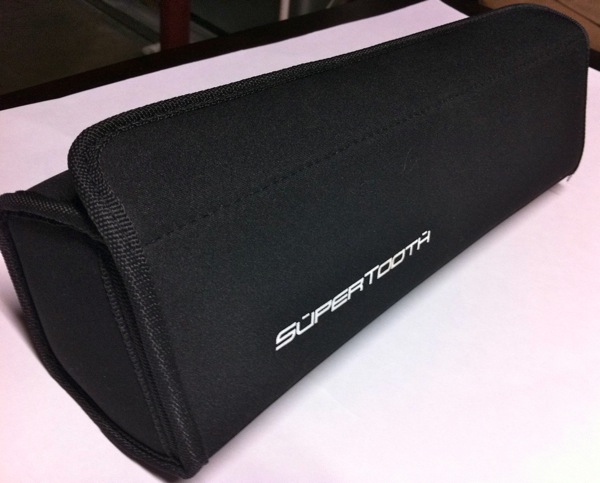 The iHome iP46 will charge your Apple product while playing music, making it more suited for use as a dock/speaker system for your office. If you are looking for a truly wireless mobile solution, the SuperTooth Disco is the best option of these three battery-powered speakers. After testing them, I would part with the two from iHome, but you better not take the SuperTooth Disco away. 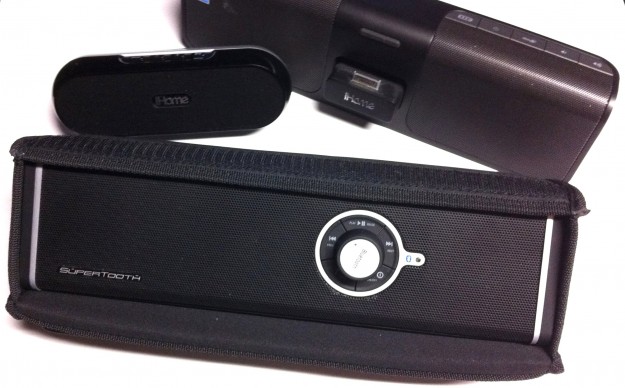