At least, they can if they’re waiting outside one of the many Microsoft Stores the company has kept open for the launch of the upgrades to last year’s Surface RT and Surface Pro tablets. Users who don’t reside near a Microsoft Store or whose local Microsoft Store isn’t opening for the launch will be able to purchase the device at Best Buy and Staples locations during normal business hours.

So far, sales of the devices seem to have fallen in-line with stock. Microsoft encouraged users looking to pick up one of the devices to pre-order before launch day, however there haven’t been in reports of shortages of either device. 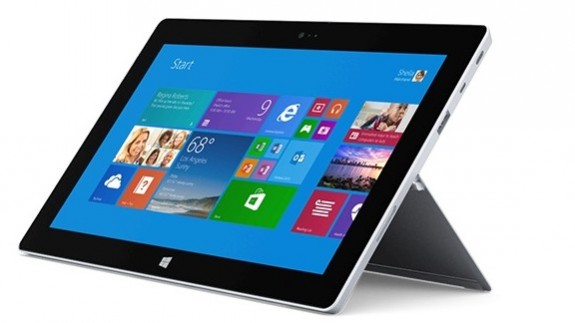 That being said, the Surface 2 appears to be a worthy upgrade. It comes complete with a much faster Tegra 4 processor, a high-definition 10-inch display, USB 3.0 and a two-step kickstand for using the device in scenarios that require different viewing angles. Surface 2 pricing begins at $449 for a device with 32GB of on-board storage.

The Surface Pro 2 also includes that two-step adjustable kickstand, however it amps up the power by including an Intel Haswell processor that’s rated to 75% longer than the original Surface Pro. As this version of Surface includes traditional PC hardware and Windows, users can install as many desktop and Windows Store applications as they wish. Pricing for the Surface Pro 2 begins at $899 for a device with 64GB of storage.

Microsoft is giving users a few extras with the purchase of a Surface 2 or Surface Pro 2. Each device comes with a two-year 200GB subscription to Microsoft’s SkyDrive cloud storage service. Buyers also receive a year of Skype land-line calling free of charge. The Surface 2 also comes with a permanent copy of Microsoft’s Office suite of productivity applications.

It’s these extras and the optional Touch and Type Covers that make the Surface 2 and Surface Pro 2 a viable alternative over something like Apple’s iPad or Macbook Air.

For its part, Apple is expected to announce refreshes for its own tablet and personal computing offerings on Tuesday.