Microsoft revealed there was a Surface 3 coming with 4G LTE wireless internet capabilities when it first announced the Windows 2-in-1, but kept quiet about the device since. This week American wireless powerhouse AT&T finally provided the Surface 3 with LTE release details have waited for. The Surface 3 with LTE arrives on July 24th. 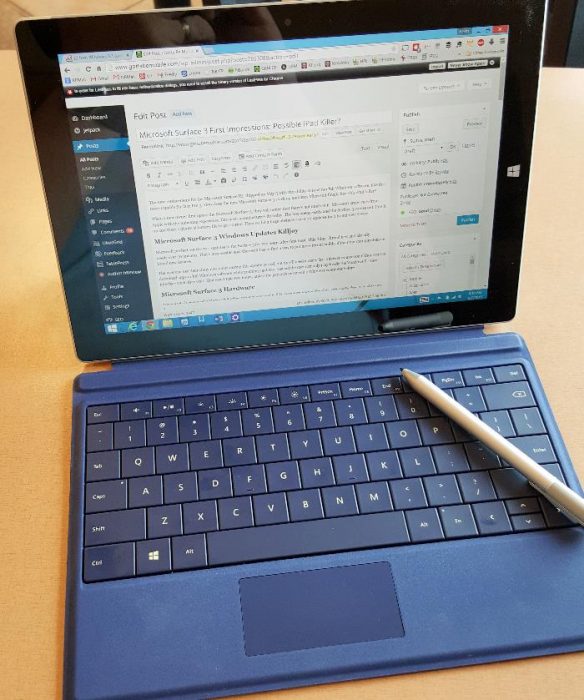 AT&T hasn’t posted the pricing for the Surface 3 with LTE without a contract or installment plan of any kind. Microsoft’s own Surface 3 website doesn’t offer that information either.

The Surface 3 with LTE lets users stay connected anywhere. Instead of hunting down Wi-Fi connections, users are able to browse the internet, stream video or do just about anything else on their Surface 3 anytime they want. The Surface 3 with LTE uses the same mobile internet connection that smartphones on AT&T have access to. Having built-in LTE on your tablet is the ultimate convenience, one that it seems strange Microsoft and ATT couldn’t make available to users a lot sooner. Microsoft revealed the Surface 3 this past March.

Though it’s late to store shelves, the Surface 3 with LTE represents the pinnacle of Microsoft’s vision for its iPad competitor. It comes with a whopping 128GB of storage space compared to the 64GB of storage that users get when they pick up the basic Wi-Fi version for $499 at the Microsoft Store. It has 4GB of RAM too, which definitely improves performance on the device.

The Surface 3 is Microsoft’s original vision for the Surface line come to life. The company created the Surface line because it wanted to foster a new generation of devices that could be both a notebook and a tablet. The first few versions of the basic Surface flopped because of the operating system that Microsoft used inside of it. You couldn’t install programs like iTunes on them at all, for example. The Surface 3 comes with a full version of Windows 8.1, meaning you can install programs.

The front of the Surface 3 is dominated by a 10.8-inch touchscreen. Inside is a robust Intel Atom x7 processor. There’s a full-size USB 3.0 port and a place to add more storage using a MicroSD card. Users can connect it to a Bluetooth keyboard and mouse, but to get the most out of the device users will need to invest in a Surface 3 Type Cover with their device, which costs another $129 on its own. There’s also a dedicated Surface Pen for $50 and Surface Dock that sells for $199.

Read: 25 Awesome Microsoft Surface 3 Accessories You Need to Get

Microsoft hasn’t said if or when other carriers will get the Surface 3, though it definitely seems like that’s planned. AT&T notes in its press release that its only “the first” carrier to offer the device.