With the Surface 3 release date here, absolutely anyone can finally pick up a version of Microsoft’s latest tablet and chief iPad Air 2 competitor.

Microsoft’s own retail stores had Surface 3 release openings and more this morning. Beginning today, anyone in the United States can order a Surface 3 directly from Microsoft’s website. Best Buy is taking online orders for the Surface 3 too. 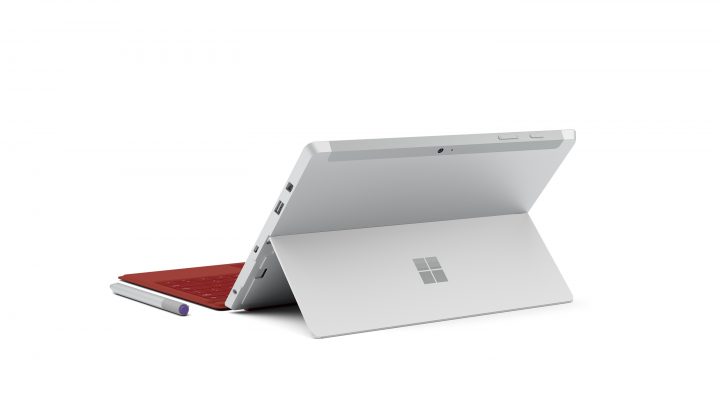 To be clear, the Surface 3 isn’t just Microsoft’s answer to high-end tablets. Microsoft is also hoping to take on the mid-range convertibles space, which doesn’t particularly have a lot of competition in terms of design and features. It borrows many of the Surface Pro 3’s iconic features and stuffs them into a more affordable package.

There are just two configurations of the Surface 3 available today for shoppers, with a two more on the way sometime later this summer. Each has different internals for different kinds of users. The entry-level $499 Surface 3 comes with 2GB of RAM and 64GB of storage. It’s for people who need a nice tablet, but don’t use their notebook PC for much video editing or intensive productivity apps.

Then there’s the $599 Surface 3 with 128GB of storage and 4GB of RAM. The boost in RAM allows this Surface 3 to be used as a full laptop replacement more comfortable. For example, it can handle light video editing. Both Surface 3’s can run less-demanding productivity apps like Microsoft Office just fine. Users won’t have a problem with playing games downloaded from the Windows Store, but my right into issues if they attempt to play more detailed games like Star Trek Online or Star Wars: Knights of the Old Republic, for example.

The other two models are Surface 3s with mobile internet technology built-in. Unfortunately, Microsoft hasn’t said anything about these Surface 3 models since it announced the other two back in April. Originally, it looked like we could expect the Surface 3 with LTE devices to launch sometime in mid-summer, but that’s very much unclear at this point.

Every Surface 3 has a 10.1-inch high-definition display, 8 megapixel rear-facing camera, 3.5-megapixel front-facing camera and an Intel Atom processor. Each of the Surface line’s signature ports are included. There’s a keyboard port that runs along the bottom edge when the device is in portrait mode with its three-step kickstand out. There’s a full-size USB port too. Microsoft did drop the charging port for a microUSB charging port. The Surface 3 is the cheapest Surface tablet to support Microsoft’s $50 Surface Pens, which are sold as an extra add-on like the $129 Surface Type Cover. Users can mix and match different colored Surface Pens and Surface Type Covers if they want.

Office supply retailer Staples will offer the Surface 3 in store, even though it seemingly doesn’t have very many Surface 3 devices available for pick up right now. For example, entire cities filled with Staples stores only have a single Surface 3 for $499 between them. Surface 3 accessories at Staples have to be ordered online. Best Buy has both Surface 3 models widely available, along with the Surface Pens and Surface Type Covers that users need.

Read: Surface Pro 3 vs Surface 3 – What You Need to Know

The Surface 3 joins Microsoft existing Surface Pro 3 on store shelves. The Surface Pro 3 starts at $799.99, but comes with a Surface Pen, a larger 12-inch high-definition display and an Intel Core i3 processor. It’s this Surface device that’s meant as a high-end notebook replacement and competitor to the MacBook Air.