Going small is the new going big, at least where tablets are concerned. Microsoft is now said to be joining the smaller tablet craze, but that move won’t be happening until early next year when the new Surface Mini will debut.

A smaller 7- to 8-inch surface was rumored to be arriving alongside the Surface 2 and Surface Pro 2 launch, but the mini was missing in action when Microsoft debuted the new Surface tablets earlier this week. Now ZDNet‘s Mary Jo Foley is reporting that there are indications that the launch won’t happen until spring. And even more, the Surface Mini will be powered by an ARM processor like the Surface 2, which utilizes NVIDIA’s Tegra 4 chip. 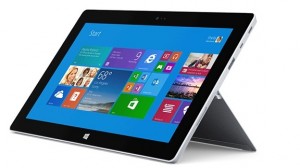 The move is somewhat surprising given the power efficiency that Intel has achieved with its latest Bay Trail and Haswell processors. And though the former chipset is based on the Atom microarchitecture, Intel has made significant improvements to deliver more performance while minimizing power consumption. The biggest drawback, perhaps, with Microsoft using ARM on the Surface Mini would be that the more portable 8-inch form factor won’t benefit from the robust catalog of classic Windows programs, and instead would be limited to the Metro UI apps.

The tablet will come with a refreshed version of Windows 8.1 called Spring 2014 GDR. This could potentially mean that Surface Mini would launch with new Windows Phone Blue, which is rumored to be called Windows Phone 8.1. In the past, we’ve heard rumors that Microsoft will begin merging Windows RT and Windows Phone together as the lines between phablet, tablet, and phones begin to blur, but it’s unclear if that consolidation will begin with Surface Mini.

And according to Foley’s source, the reason that Microsoft was not able to deliver Surface Mini alongside the Surface 2 and Surface Pro 2 launch is because the company had to re-organize resources to accommodate the Xbox launch. Priorities for Microsoft’s Terry Myerson’s team is to launch Xbox One OS this year and to push Windows Phone 8 GDR 3 out by the end of the calendar year, and so staff from Windows and the Surface team were pulled off their projects to assist with those priorities.

Given its Windows RT OS, Surface Mini would compete against similarly sized consumer tablets, like the iPad mini, the Nexus 7, LG P Pad 8.3, and Samsung’s Galaxy Note 8 and Galaxy Tab 3 8.0.

Unfortunately, given that Apple is rumored to be updating its iPad lineup later this fall with a new iPad mini 2 with Retina Display, Microsoft will leave that market unchallenged until 2014, allowing its competitors to gain more momentum.