New leaked specs for Microsoft’s second generation Surface computing tablets have emerged, and the updated specs on these slate devices will provide users with a better experience thanks to significantly improved battery life with the inclusion of Intel’s latest Haswell processors. The Pro model, which is expected to debut with Windows 8.1 pre-loaded, will come preloaded with a power sipping Intel Core i5 processor based on the Haswell architecture.

As the original Surface Pro currently offers about 4 to 6 hours of computing time on a single charge, Haswell’s inclusion should make the second generation Pro go for at least 8 hours without requiring a recharge. This would allow Microsoft to boast all-day computing for enterprise customers who are concerned of staying charged through the day using the first generation Surface Pro. 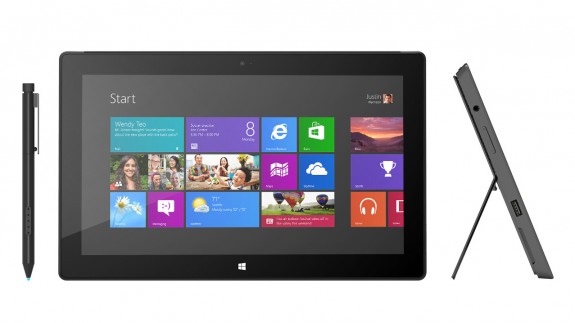 The Surface Pro 2 is rumored to come with more RAM, Intel Haswell Core i5 processor, and improved battery life over the first generation model it replaces.

Other specs bump include doubling the RAM from 4 GB to 8 GB. This will likely be a noticeable increase on the Pro 2 as multitasking will be more fluid and things should feel snappier when using legacy Windows app. As the Surface is perceived firstly as a tablet–though its specs and performance is perhaps more closely aligned with an Ultrabook class of products–consumers will expect things to be snappy, fast, and quick similar to lighter Android-based consumer tablets and the Apple iPad.

And according to Neowin, the design will stay largely similar, though it’s now said that Microsoft will improve the Surface’s kickstand. The kickstand, along with the keyboard cover that magnetically attaches to the tablet, are hallmarks of Microsoft’s computing line.

The second-generation slate will have to compete with the Sony VAIO Tap 11, a device with a similar form factor to the Surface Pro. On Sony’s you’ll have a two-piece setup where the keyboard isn’t magnetically attached to the tablet display portion. Rather, the keyboard, when the computer is in use, is a separate piece that connects wirelessly to the screen. The good is that the wireless connection is more flexible overall. The bad is that we’re not sure if this will translate to a good experience for lap users.

Additionally, the device will also have to ASUS’ Transformer Book, a device that got similar bumps in specs, including moving from an Intel Ivy Bridge to Intel Haswell processor and doubling the RAM from 4 to 8 GB.

Microsoft is said to be working on a new series of ad campaigns for the Surface devices that serve to educate the consumer on the power and potential of the tablet. Current ads are more playful with dancing and tapping, but may not show the consumers what the devices are capable of.

In addition to the Pro 2, Microsoft may have a second generation Surface RT as well. Additionally, recently acquired Nokia is said to be working on a Surface-like design based on the Windows RT architecture; it’s unclear what the fate of that device will be.