When the football season officially starts on September 4th, NFL coaches will still be able to get shots of their players on the field taken with a Polaroid camera. There will also be a new option that lets them see pictures of plays about 30 seconds before they could otherwise: Microsoft’s Surface Pro 2 tablet.

The NFL officially began using versions of Microsoft’s Surface Pro 2 tablets covered in a waterproof case as replacements for old-style photography this past Sunday’s Hall of Game, according to Businessweek. This marks the first time that anything other than simple Polaroid cameras have been allowed on the sidelines. 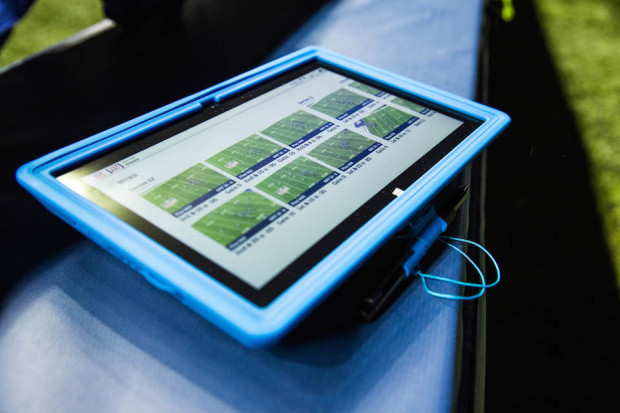 Microsoft’s Surface Pro 2 tablets offer a lot. They may look like normal tablets, but really, they’re mini laptops with a keyboard. Released roughly a year ago, the Surface Pro 2 belongs to the part of Microsoft’s tablet line that uses Intel processors, making them fast and compatible with the millions of Desktop applications that have been available for years. Unfortunately, for NFL coaches, they won’t be getting the opportunity to experience any of that.

Each of the thirteen Surface Pro 2’s supplied to NFL teams this year will be locked down. Coaching staff won’t be browsing the internet, or taking pictures of their player’s mistakes from the sidelines using the Surface Pro 2’s rear-facing camera. Coaches will be able to look at pictures taken by staff on the field, but they won’t be able to take any of their own. The NFL’s Surface Pro 2’s will all be using to a stadium-wide wireless network that’s completely separate from anything else. Teams won’t even be able to use the Surface Pro 2 away from the field – the NFL is actually supplying each team with the tablets they need. The idea is to prevent a single team from gaming the tablets and gaining an unfair advantage over an opposing team.

Typically, old habits die hard. NFL teams are still using Polaroid pictures today because capturing video of the field is strictly prohibited. NFL teams can’t even have a computer during practices and games of any-kind. That’s why the limitations on the Surface Pro 2’s being supplied to teams are so strict. When a game isn’t being played, the Surface Pro 2’s will be locked inside a temperature controlled cart until the next week’s games.

These new sideline Surface Pro 2 devices are just the latest thing to come out of a $400 million deal that Microsoft and the NFL first announced last year. The deal is made up of two parts.

The biggest part is simply marketing related. Official NFL commentators have used Surface Pro devices on-set for around a year now and those logos are always visible. By making Surface Pro 2 devices available on the sidelines, Microsoft is showing off a practical use for the tablet and possibly hoping to inspire users and other large companies to switch to Surface for their device needs.

The second part of the deal is directly related to content. Last year, Microsoft revealed NFL on Xbox One & Windows. Both of these apps allow users to track how successful their NFL.com fantasy football team is plus stream video highlights. NFL on Xbox One even lets users multitask. It sends notifications when big plays are made. Those notifications include video highlights and the current statistics for a particular player. Microsoft recently announced that NFL on Xbox One would get support for NFL Sunday Ticket streaming and compatibility with Fantasy Football services sometime soon.

The 2014 NFL season kicks off on September 4th. At that time users should be able to spot these Surface Pro 2s on the sidelines since using them as a photo album gets them pictures of their team faster than typical film.