Microsoft is making the cost of upgrading to its latest devices a bit lower for its most loyal fans. This week the company unveiled a Surface Pro 4 deal that get users as much as $700 off the cost of purchasing its latest Windows 2-in-1 – provided that they have an old Surface to trade-in. 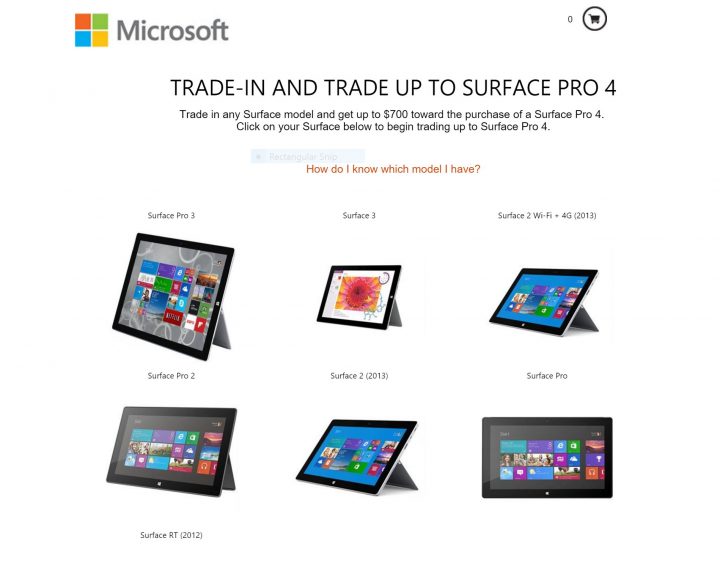 Microsoft says that this Surface Pro 4 deal is available until November 17th in the United States and Canada. To get their savings shoppers have to purchase their device directly from the Microsoft Store. Also, users need to remember to provide their power cable and remove all of their stuff from the device they’re trading in. Once those taking advantage of the savings have their code, they’ll have until December 7th to use it.

Interestingly enough, the terms of this Surface Pro 4 deal specifically say that it doesn’t apply to previous purchase, like pre-orders made before the Surface Pro 4 release day. Microsoft announced the Surface Pro 4 on October 6th and immediately began taking pre-orders. It stands to reason that the most loyal Surface fans pre-ordered their device before release day. Those users aren’t likely to be happy about Microsoft intentionally cutting them out on savings.

It’s also interesting that Microsoft doesn’t include any savings for Surface Book buyers at all. This deal specifically applies to the “purchase of a new Surface Pro 4.” Why that is remains unclear, but Microsoft does consider the Surface Book the start of a new form factor in the Surface line-up, not an evolved Surface Pro. The Surface Book has a 13-inch display that disconnects from its magnesium clad notebook base. Inside that notebook base are extra batteries, expansion ports and beefier graphics processors for faster performance in demanding apps like Adobe Premiere. The machine is also great for playing video games.