After weeks of speculation, Microsoft, makers of the Xbox One and Surface Pro 3, have finally set a date for their next announcement. Invitations sent out to today invite members of the technology press to check out new devices running the company’s Windows 10 operating system at an event on October 6th. Allegedly, that event could include a Surface Pro 4 reveal and more details about the rumored Lumia 950 and Lumia 950 XL iPhone rivals.

Microsoft began sending out invitations to an event in New York City this morning, hours after rumors indicated that the Surface Pro 4 release date would get announced at an event on October 10th. It turns out those reports were wrong. Microsoft is holding a hardware even ton October 6th not October 10th. 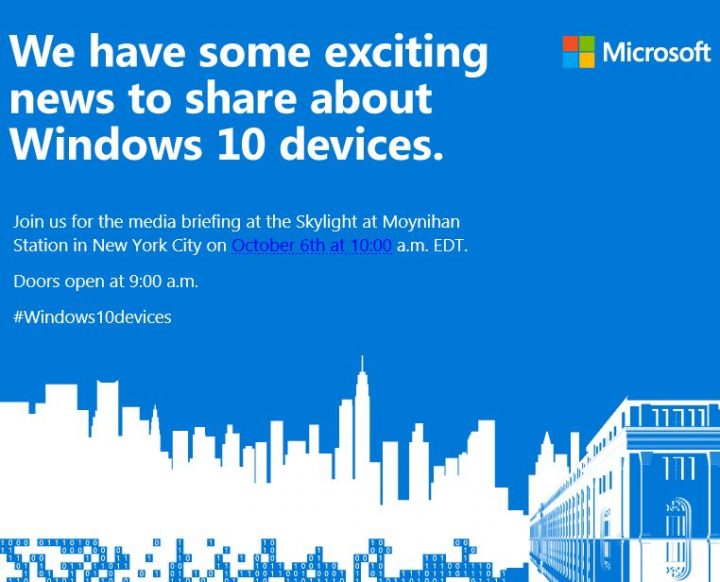 The invite in question has white text on a blue background with the New York City skyline. “We have some exciting news to share about Windows 10 devices,” the invitation begins. Microsoft will hold this Windows 10 hardware event at 10AM on October 6th Eastern Standard time. Microsoft doesn’t include any other information about what will be shown during the event on the Invitation. In fact, the only reason we know about it is that Microsoft included the #Windows10Devices hashtag for the event.

It can’t be a coincidence that Microsoft is announcing something about Windows 10 devices at an event in New York City. For weeks, rumors have indicated that Microsoft plans to refresh almost its entire line-up of new devices at a single event before the holiday shopping season. It was in New York City last year that Microsoft announced the Surface Pro 3, it’s most successful Surface device yet. With the Surface, Microsoft is trying to blend the productivity of a notebook with the convenience and ease of use of a tablet.

Microsoft said officially last year that it didn’t have plans to change the charging port or screen-size of future Surface Pro devices so that companies would feel more comfortable investing in accessories and adapters. That promise doesn’t necessarily keep Microsoft from introducing a new form factor besides the Surface Pro 4 or making changes to the hardware inside.

Besides the Surface Pro 4, rumor is that Microsoft will announce a new Microsoft Band to take on the Apple Watch. The two iPhone 6s rivals, the Lumia 950 and Lumia 950 XL, are expected to be flagship smartphones with plenty of processing power, large screens and an exclusive feature not available on any other devices yet. Called Continuum, the Lumia 950 and Lumia 950 XL will have USB Type C ports that connect to a dock so that users can interact with their phone apps with a keyboard and see their apps on an external monitor. When connected to a dock, apps from connected phones will look exactly like they do on Windows 10. That’s because, they are the same apps.

Some also expect Microsoft to at least show its Hololens wearable computer again. HoloLens is a fully contained Windows PC that runs Windows 10 apps and services. Microsoft showed off a version of Minecraft coming exclusive for HoloLens at this year’s Electronic Entertainment Expo in June.

Microsoft says that it’ll broadcast this event to Windows users around the world. It’s also, broadcasting the event on its Xbox One console, the first time its gone that far on a Windows specific event. The too makes sense, the Xbox One is getting a Windows 10 era update this November. Reportedly, Microsoft is set to start sending out invitations to test that Xbox One software update, which includes the Cortana personal assistant, very soon.