Microsoft is preparing to launch its Surface Pro tablet, which runs Windows 8 Professional and Intel’s core processors, and demo units of the Windows slate has been seen at various retail locations. It’s unclear which retail locations are showcasing the demo units in advance of consumer availability of these slates on February 9.

In addition to Microsoft’s online store and Microsoft’s retail stores, retailers Best Buy and Staples are also expected to be carrying the Surface Pro tablets at launch day. 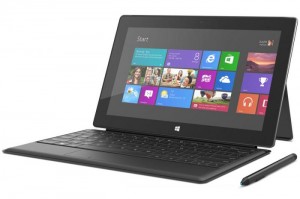 The Surface Pro will feature the same design as the Surface RT tablet, but will also give users the ability to run all programs made for Windows and not just the Metro apps that Surface RT could only run. The tablet will come equipped with a magnetically-attached digitizer pen and users can also pick up an optional keyboard cover for typing.

The 64 GB model of the Surface Pro costs $899, though we would advise users to consider spending an extra $100 and upgrading to the 128 GB model, which comes with twice the storage capacity. The reason being is that Windows will take up a significant chunk of storage space, and installations for Windows programs could fall on the heavy side of things. Though the Surface Pro is marketed as a tablet, its performance and specs make this slate more akin to an Ultrabook.

Interested customers can buy the Surface Pro starting on February 9.