Microsoft had announced earlier this month that the Surface Pro tablet–the Windows 8 Professional loaded version of the Intel-powered slate–will be available in 64 GB or 128 GB flavors starting on February 9th with the price differential between the two models being $100. With the 64 GB model retailing for $899 and the 128 GB model, which doubles the storage, costing $100 more at $999, pricing alone should favor the model with more copious storage.

But aside from pure pricing reason, Windows 8 alone is sole reason enough to splurge the extra $100 and get the 128 GB model, and here’s why: 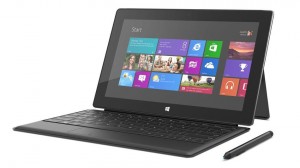 According to a statement from Microsoft to Softpedia, Windows 8 will occupy 45 GB on your slate no matter which option you choose. This means that on the 64 GB slate, you’ll only have 19 GB of storage remaining to play with, or roughly 1/3 of the storage you thought you would have to begin with. On the 128 GB mode, 45 GB is about a third of the storage of that slate and that means users are left with 83 GB for their files, photos, music, and videos.

And given that the Surface Pro can run not only the Metro-designed apps that Surface RT can run, but the slate can run any number of apps designed for Windows 7 or earlier, including heavy programs like Adobe’s Creative Suite and the full version of Microsoft’s Office suite. Installing these apps will take up even more space on your limited storage capacity, and the files that you’ll have will take up its own space as well. Load up on Photoshop and edit a RAW image file with that digitizing pen and you’ll find yourself wanting more space.

Fortunately, though, the Surface Pro does come with expandability. It has a micro SD card slot, which means users can add another 64 GB maximum via a micro SDXC card. Users who opt for the 64 GB can now have another 64 GB for file storage, totaling about 128 GB. There’s also a USB 3.0 port so you can add flash drives, USB hard drives, and other USB-based storage options. And of course users will also have access to Microsoft’s SkyDrive for connected cloud storage. There are also third-party options like Dropbox and Box among others as well.

This isn’t the first time that Microsoft has been under fire for its limited storage and robust OS occupying a large chunk of that storage. When it released the Surface RT slate running Windows RT and ARM chips, users were unpleasantly shocked that they only had 16 GB left after all the built-in apps and OS partition took place on the 32 GB model and the 64 GB model netted them with just 46 GB of storage space. Again, Windows RT apps are a bit leaner than the full-sized Windows programs that the Surface Pro are privy to, so you should factor that in as well.

For now, we say the extra $100 to double Surface Pro’s storage to a total of 128 GB is worth considering if you’re eyeing Microsoft’s tablet come this February. A 64 GB micro SDXC card retails for about $60 via Amazon as well.