Employees working on Microsoft’s Xbox Team have spent the last few weeks teasing big news for the backward compatibility feature the company revealed at this year’s Electronic Entertainment Expo. Today, we’re finally learning more about why those employees were so excited. Borderlands one of the Xbox 360’s most popular titles, is now available on the Xbox One through Backward Compatibility.

Microsoft announced the new addition to the Xbox One’s digital library of playable Xbox 360 games this morning on its Major Nelson blog. The new game is a notable addition to a growing stable of titles all coming to the Xbox One. Backward compatibility will allow Xbox One owners to play Xbox 360 games as if they were still on Microsoft’s last-generation console. The feature garnered huge applause from E3 attendees back in June.

Microsoft says that members of the Xbox One Preview Program can begin playing Borderlands on their Xbox One console immediately. Users who purchased a digital copy of the game from the Xbox Store should find the title in their line-up automatically. Purchasing the game through the Xbox Store now also unlocks the game on Xbox One. Anyone who has a disc will need to play the disc in their Xbox One’s disc drive. A digital download of the title will begin the moment an Xbox One in the Xbox Preview Program detects the Borderlands disc. Despite having a digital download, users will still need to place their disc in their Xbox One to play the digital version of Borderlands that they download. 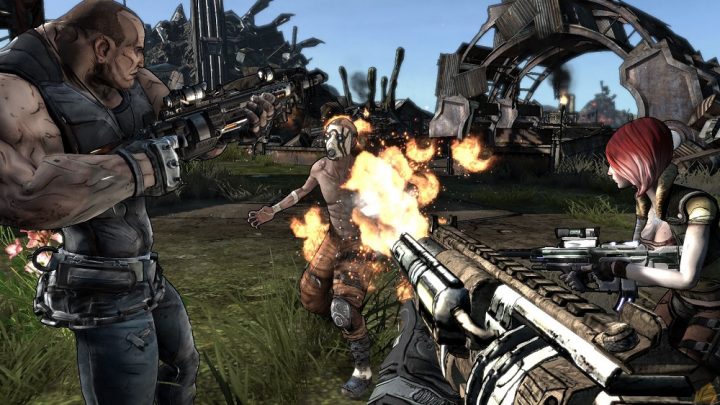 2K games, the publisher of Borderlands, said this morning in a statement that they were “proud to support Xbox One Backward Compatibility by bringing the complete, original Borderlands to Xbox One. “ The statement goes onto point out another interesting fact, Xbox One Backward Compatibility includes support for the downloadable content for each game.

Microsoft has said publicly that introducing Xbox One Backward Compatibility for the Xbox One was a huge undertaking on its part. Many casual gamers assume that they’ll be able to play games across different consoles in the same family, but that’s rarely ever true. The Xbox 360 had pretty limited support for original Xbox games. The PS4, Sony’s video game console, isn’t backwards compatible with PS3 and PS2 games overall. Sony took the first steps to introducing backward compatibility early this console generation when it revealed that PlayStation Now would allow PS4 users to rent games on its servers and play on their internet connected console. Though brilliant, PlayStation Now costs users extra money – even if they already had a copy of the game.

The beauty of Xbox One Backward Compatibility is how simple it is for most involved. Microsoft says that publishers don’t have to do any updating on their part. What’s more, to the Xbox One user the integration is seamless. Xbox One users can do all the things they’d expect in these games. Screenshots, video recording, all work perfectly. The Xbox One’s software includes an emulator that lets the digital downloads think that they’re running on the Xbox 360.

Microsoft is pushing Xbox One Backward Compatibility for the Xbox One in a pretty big way. Rare Replay, a massive collection of games made by Microsoft’s developer Rare, includes a ton of Xbox 360 games for Xbox One users. Anyone who purchases Gears of War Ultimate Edition gets digital copies of previous games in the series through Xbox 360 Backward Compatibility too. Users who pre-order Fallout 4 get a digital copy of Fallout: New Vegas too.

The problem for Microsoft will be trying to convince publishers to support the Xbox 360 Backward Compatibility program even though they could simply remaster their games and eek out more money from those willing to pay for it. Officially, Microsoft will have over 100 titles available through the program when it launches this November.