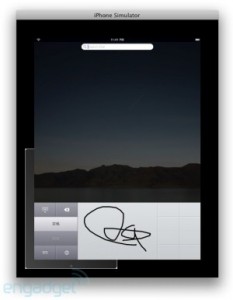 Engadget almost got me excited with a mention of a prototype handwriting keyboard on the iPad, uncovered with a look at the iPhone OS 3.2 SDK.  But then I saw the screenshot that led to it.

Sorry folks, it’s not new; it’s just the Chinese language keyboard that’s been part of the iPhone for more than a year.