A survey of iPhone 4 owners conducted by ChangeWave has turned up some interesting findings that I’m sure fanatics of all stripes will spin to their advantage. The one I’m going to spin is the finding that 8% of users claim to dislike the lack of handwriting recognition. 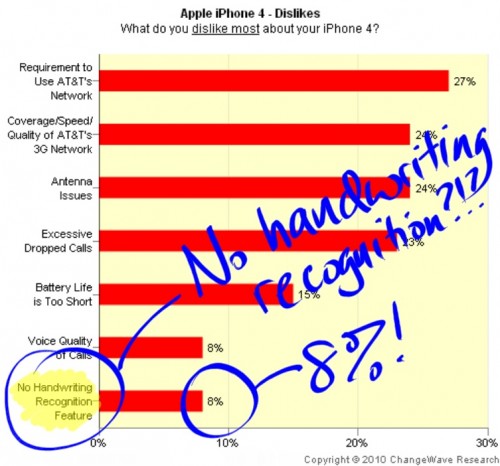 Yes, I know 8% seems like an insignificant number, but it was enough to make the list, and with millions of iPhone 4 users, that could add up to be a hundred thousand people who want to write on their iPhones. That’s not chicken feed.

Perhaps, and please allow me this one fleeting instance of hope, this is an opportunity to get Steve Jobs to reconsider his “no stylus” rule and recognize pen as an important input option. I’m not saying Apple should start including pens with the iPhone, just think about making pen input something that people could add if they wanted to. And not just a capacitive stylus but real pen input backed up by an active digitizer and handwriting recognition.

Steve, I ask you to just think back to your calligraphy days in college and imagine how great it would be if you could merge that experience with that of the iPhone and iPad. You were “fascinated” by the pen at one point. Don’t let the sour response to the Apple Newton and pen-based Tablet PCs block those good memories from your mind. If Japanese and Chinese users can take advantage of handwritten input, why can’t the rest of us?