Yikes! The Tablet marketing mavens and analysts are at it again. Tablet sales are slipping and consumer satisfaction is fading as prices decline. It’s time to chuck it all, build an ark and batten down the hatches against the flood of unsold and unsatisfactory Tablets that is sure to drown us all. Not really. We’re starting to see a market mature, and maybe a bit of a shake out beginning. Here’s hoping. 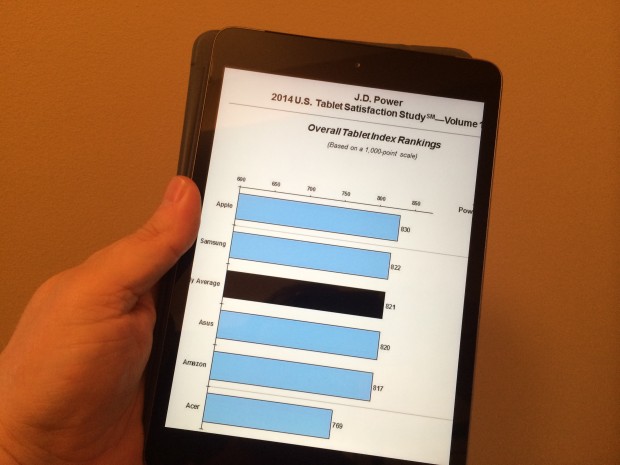 Recent surveys from J.D. Powers and IDC have pointed to some interesting data about the Tablet market, and the doomsayers and the fan boys are out in the streets in full regalia predicting the end of Tablets as we know them, and anointing winners in a race that never ends. If there is any news in either of these reports it is that price points matter but delivering value for a buck matters more. Note, someone actually paid someone to come up with that info.

J.D. Powers reports that Apple is number one in consumer Tablet satisfaction with Samsung second. Asus, Amazon, and Acer trail the leaders. More to the point though, J.D. Powers says that the lower the price for Tablets, the greater consumer dissatisfaction.

Lower price is the No.1 reason for tablet choice in 2014, with 25 percent of current tablet owners citing price as the main reason for selecting their current brand, compared with 21 percent in 2013. Features offered and brand reputation are the next most-frequently cited reasons for selecting a tablet device.

The rise of large-screen phones and consumers who are holding on to their existing tablets for ever longer periods of time were both contributing factors to a weaker-than-anticipated quarter for tablets and 2-in-1s.

In sum, the two reports say that the rapid pace of Tablet sales is slowing down, and consumers are more unhappy with the lower end, lower priced models. What the headlines should be saying is that lower end Tablets could hurt the perception of the market and consumers with higher end Tablets are not looking to buy new anytime soon. Both are signs of a maturing market that didn’t exist four years ago.

Keep in mind that no one needs a Tablet. They are great devices, but there’s nothing you can do on a Tablet that you can’t do on a notebook, a smartphone, or a desktop, except for being a bit more mobile. In the example of a smartphone you’re actually less mobile with a Tablet. Tablets are great mobile devices (I swear by them) if the combination of form factor and user experience fits your needs. They are not going to fit everyone’s needs, nor should they.

Even so, Apple, Samsung, and others have sold a bunch of Tablets already. Some of them are really well made quality devices. Some of them are crap. The really good Tablets cost more and the crap ones are trying to capitalize on a trend by going to market with lower prices and lesser quality. There are markets for both. But the age old truth, “you get what you pay for” holds true when it comes to Tablets just like everything else.

With the exception of the “must have the latest and greatest gang,” most purchasing a high end Tablet are probably thinking that their current purchase will last them at least two years if not longer. We may be in a post-PC age, but I don’t think consumer thinking has made a transition away from the way most are accustomed to shopping for a computer. That may be bad news for companies that want to sell a newer Tablet every year, but then they are already looking into wearables and other possibilities in hopes of expanding as the Tablet market evens out.

There is only so much room left for any significant innovation in the Tablet hardware space beyond what we have now. Sure, there will be lighter and thinner models with fingerprint readers and other features. But there’s just not much else to cram into metal or plastic frames surrounding glass displays that come with free fingerprint magnets.

Innovation will continue in the Apps and services Tablets run and it is a tough argument to make that we’ll see new Apps and services that can’t be run on the existing hardware, at least the hardware in the upper end of the market. Yes, there’s rumbling about 4K displays and other things, but those possible innovations are not going to drive a new rush to buy newer hardware. From a consumer standpoint things are great for those who bought on the high end. They’ve got a Tablet for the next few years.

On the other end, it should come as no surprise that consumers are less satisfied with cheaper Tablets. While they may be a short term bargain and look comparable on store shelves, in the end they are no different than Netbooks that attracted flocks of buyers, knocked a hole in the PC market, and died a quick death.

If there’s a problem it is that Tablets do look the same and price is an easy distinguishing factor for the uninitiated. A consumer who sours on Tablets because of a bad experience with a cheaper model may be less inclined to try a higher end model in the future.

But as it currently stands with these market and consumer snapshots, I’d say we’re beginning to see the market mature a bit. That’s a pretty remarkable thing considering that it really only began in April 2010.