Just when we thought frustrating games and all the Flappy Birds hype was coming to an end, the frustration returns.  Earlier this week the creator of the popular yet irritating Flappy Birds game confirmed his new title would be released later this week, and today’s the day.

This afternoon Dong Nguyen officially released his latest game called Swing Copters, and it promises to be even worse than the original. Flappy Birds took the internet world by storm for being a dead simple game with easy to play mechanics, but it was nearly impossible to enjoy without getting very frustrated.

That being said, if you’re up for a challenge that may get you so irritated you nearly throw that precious $500 smartphone at a wall, Swing Copters is for you. It’s essentially Flappy Birds on crack, or X100, because it’s ridiculously hard and we’d go as far as to say impossible.

If you’re a fan of Flappy Birds or any of those other games (like some puzzlers) that get you extremely frustrated where you’ll need to remain calm and try to beat the odds and win the game, you’ll love Swing Copters. Personally, I find it nearly impossible to play and it was uninstalled just as fast as I installed it. I’d like to keep my sanity.

Just like Flappy Birds, a series of taps will have you in control of a little helicopter that you must maneuver left, right, or up through the level. Here’s where things get tough. There are swinging hammers that will ruin your fun almost instantly. Every time. 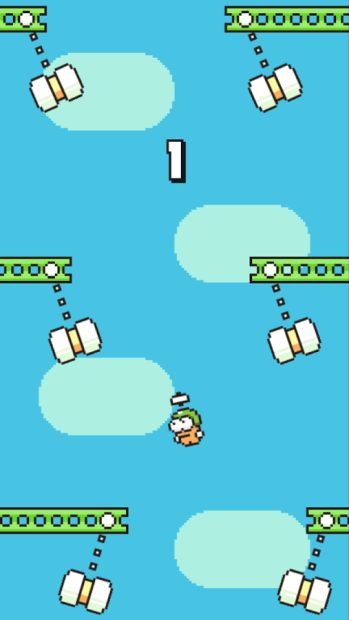 When we say every time, we mean it. I played for a good 10-15 minutes and didn’t get past the first set of hammers. Yes, my high score is 1, and then it was uninstalled. Flappy Birds was somewhat difficult and took a little precision to get a high score, but this game is just erratic, and on the verge of pointless.

According to the details you can tap on the screen to change directions of your little Copter, but the controls go just about any which way and there appears to be no control whatsoever. You should be able to tap to change directions, and once you get four medals it will unlock new characters and different “copters” which are little people with propellers on their heads.

TouchArcade managed to get a high score of 5, which is pretty impressive if you ask me. Although a few more minutes of watching you’ll quickly notice that was beginners luck as they don’t get anywhere near that score again for the remainder of the video.

That’s all there is to it. Just like its predecessor you’ll be trying to avoid obstacles while advancing as far into the game as possible. Just don’t expect to get very far or you’ll be let down. We won’t spoil it any more for you. Give it a try today, available now in the Google Play Store.

So what about Flappy Birds? Dong claimed he’d bring the extremely popular game back after removing it earlier this year for an array of reasons. Some being he thought gamers would get too addicted, not to mention all the hate-mail he’d been receiving. It arrived recently for the Amazon Fire TV, slightly revamped, but we’re still expecting the regular Flappy Birds game to make a terrifying and triumphant return to Android and iOS in the near future.