Users frustrated by the changes made to Android for Sense 5 on the HTC One, but who would prefer to hang on to the features that the Android skin does offer, could go between it and stock Android using SWITCH. 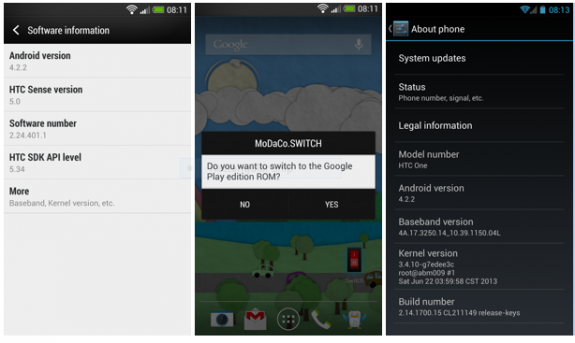 SWITCH Allows HTC One users to make use of the same contacts, email accounts, and text messages even when switching versions of Android.

Instead of having data and information separated between each operating system, users are to use SWITCH and only have one set of data. That saves them from having to go through the trouble of adding in contacts and email accounts in two operating systems.

Unfortunately, as SWITCH is still in beta, it may be a long time before any and every HTC One user can flip between two different versions of Android. According to a support topic on the MoDaCo forums, the software isn’t yet ready for an open beta.

Right now, the software only runs on the version of the HTC One that is available to users on GSM networks like AT&T and T-Mobile. For example, users who purchased the device from Sprint wouldn’t be able to get the software working on their devices. SWITCH is also restricted to those devices that are unlocked or have hardware level, or what is commonly called “root,” access to their device.

Right now the software isn’t integrating call logs and messaging data between each operating system, though its developer does note that this functionality will come at some point in the future.

SWITCH could be the break Android users have been waiting for. For years, Android users have prided themselves on being able to customize the operating system on their devices to their heart’s content using new Android Skins and software.

If SWITCH is able to overcome some of its technical limitations, it might be just the thing to make experimenting with Android skins and custom operating systems that much easier, even if its installation process doesn’t place it within the technical grasp of casual users.