Customers who don’t subscribe to the carrier monogamy model and those who may switch between various carriers in the U.S. frequently may find better value in starting with a CDMA iPhone model from carriers like Sprint or Verizon. The CDMA models offer broader support for more of the wireless protocols and radios available from the major carrier networks in the U.S., including support for Verizon, Sprint, AT&T, and T-Mobile, with the latter two being GSM networks.

This means that the CDMA iPhone 5S and iPhone 5C models that will be sold through Apple, Verizon, and Sprint channels can work on those carriers’ CDMA, EVDO, and LTE data and voice networks along with GSM, EDGE, UMTS, HSPA, and LTE networks that are operated by rival GSM carriers AT&T and T-Mobile in the U.S. 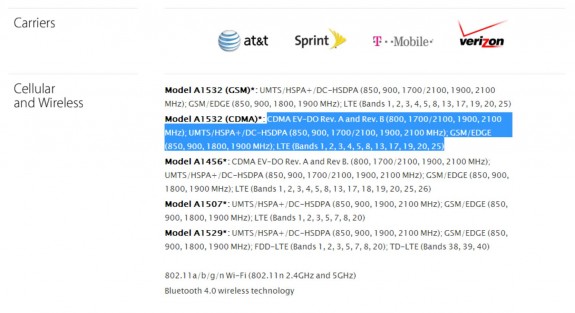 Take the iPhone 5C model listing, for example. Apple currently lists two CDMA models, and either models should be compatible with GSM networks in the U.S.

Unfortunately, this means that you can’t start with a Verizon model and switch to Sprint, or start with a Sprint model and later change to Verizon and use the same hardware, but you can start with either CDMA carriers and go GSM later if you want. On the other hand, the GSM A1532 model of the same phone is listed without CDMA and EVDO support.

For consumers, if you’re starting your iPhone experience on AT&T’s or T-Mobile’s network, for example, and later realize that you’re displeased with your GSM carrier of choice, you would not be able to use the iPhone on a CDMA carrier. If you start with a GSM carrier, you’d need to buy a whole new iPhone 5S or iPhone 5C model if you decide you want Verizon’s larger 4G LTE footprint and coverage or Sprint’s Unlimited plans.

On the other hand, if you began the experience on Verizon or Sprint, your CDMA iPhone model would work–based on Apple’s listed specs–on GSM networks where you’d even have access to LTE networks operated by T-Mobile U.S. and AT&T Mobility. This way, if you’re unhappy with Verizon service or Sprint’s coverage, you can always bring your CDMA iPhone to a GSM carrier without any issues and you won’t need to buy a whole new phone provided you can get your carrier to unlock your iPhone for use with a different carrier.

For many Americans this isn’t an issue considering that iPhone models are typically tied to a two-year contract. However, for those who may want to pay full price, don’t want to sign a contract, or are looking at buying their devices through programs like T-Mobile Jump, AT&T Next, or Verizon Edge and may want to switch to a different carrier experience early, this may matter.

Additionally, as the unlocked version of the iPhone is typically sold based on the GSM model, Apple’s CDMA iPhone model may offer the best value yet for American customers. Typically, CDMA models are already sold SIM unlocked so if you have a Verizon iPhone you may be able to pop in an AT&T nano SIM and use that model on AT&T’s LTE network even.

For more information about carrier network support, Apple has also setup a help page for customers to determine which iPhone model their carrier network of choice will support.