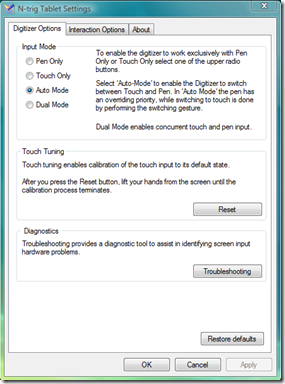 In my interview with N-Trig’s Lenny Englehardt, we talked about the different modes that the N-Trig digitizer supports: pen only, touch only, Auto Mode, and Dual Mode. The Latitude XT ships with Dual Mode as the default, which  allows you to use your pen or touch without having to manually switch between the two. The pen takes precedence, though.

I’ve been giving Dual Mode a fair shot today, and while I have not experienced any vectoring issues during handwriting, I have found my hand accidentally activating things while the pen was lifted momentarily during writing. These are things like system tray icons, the clock, etc. So, I began looking for a way to switch to Auto Mode, which allows you to turn on touch temporarily until you bring the pen back to the screen. So I activated the N-Trig Tablet Settings icon in the system tray and activated Auto Mode. The problem I ran into, though, was that I couldn’t figure out how to activate the switching gesture that the N-Trig Tablet Settings dialog box tells you about. It tells you to activate the switching gesture to switch from pen to touch, but it doesn’t bother telling you what that switching gesture is.

I remembered in my interview, thought, Mr. Englehardt mentioning that Auto Mode being activated by double tapping the screen with your finger. I did the double tap, and it worked just as described. Since most people will not think to look up that interview to figure out how to activate the switching gesture, it’d be a good idea for Dell or N-Trig to include that little bit of information on that dialog box.

By the way, I much prefer Auto Mode over Dual Mode. I’m getting zero interference from my hand, and I’m able to quickly activate touch whenever I want, and quickly turn it off by bringing the pen to the screen. Pretty darn cool and well designed.