Nokia has quietly announced that the new Symbian Anna software update, which had already begun to ship pre-loaded on some newer Symbian phones, is now available to download for users of all Symbian^3 hardware, including the Nokia N8, C6, C7, and E7 smartphones. According to the Finnish phone-maker, Symbian Anna could either be downloaded from a PC via the latest version of OVI Suite, or over the air directly on the phone.

It may take some time to roll out to all phones. At the time of this writing, I had checked for the Anna OTA update on my Nokia N8 and it was not yet available for my particular phone. Though the update is now available, Nokia says that the precise roll-out time will vary from market to market, so depending on which country you live in, you may have to still wait a bit longer for Anna to appear on your phone. 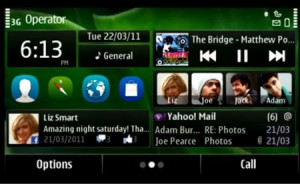 According to Nokia, “Symbian Anna represents a significant update to the experience those users have and demonstrates our ongoing commitment to Symbian, which will see up to 10 more phones introduced over the next 12 months, further updates to the user experience and support for the software until at least 2016.”

In addition to a new browser, here are some of the new features that Anna brings:

Symbian Anna key features:
– Virtual portrait QWERTY for fast, one handed typing
– Split screen view while typing; so you can see message threads, webpages, contacts or email
– An easier to use and faster browser, delivering quicker page loads and improved navigation
– Refreshed Nokia Maps including simpler search, new public transportation routes and the ability to check-in to Facebook, Twitter, Foursquare or local social networks
– A feature to share your location via email and SMS (even to non-Nokia phones)