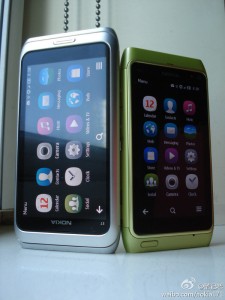 While we had previously reported on Symbian Belle, the software update that will follow Symbian Anna, previously at GottaBeMobile, we’re seeing shots showing how the icons will look on both the Nokia N8 and the Nokia E7 in both portrait and landscape orientations.

The Symbian Belle update is said to be coming either at the end of 2011 or early 2012 for both devices.

Stylistically, the new Symbian Belle will bring the aesthetics closer to what we’re seeing on modern mobile OSes, like Android. We’re seeing notifications and settings for WiFi, cellular radio, and others pushed up to the top menu bar at the upper right, and on the bottom, we’re seeing more finger-friendly navigation options for back, search, and menu, rather than the two contextual soft-keys that are present on the current version of Symbian^3 found on shipping versions of the Nokia E7 and N8.

Moreover, the bubbly icons somewhat reminds me of the icons found on Samsung’s TouchWiz UI on Android in that it’s a bit cartoon-like, but gives a consistent feel for the apps on the page.

My Nokia Blog noticed that the fonts are somewhat jumbled on this image, which may suggest that this is still a very early build of the Symbian Belle release. On the devices, the Menu is rendered in Nokia’s Pure font while the icons make use of Nokia Sans.

While users may look longingly at Symbian Belle, before Belle happens, Nokia will release Symbian Anna for eager Nokia E7 and N8 owners.