The T-Mobile 4G LTE network is finally live in select cities and from our early T-Mobile 4G LTE speed tests it’s clear that AT&T, Verizon and Sprint are in for some competition.

T-Mobile issued an update for the Galaxy Note 2 last week to turn on 4G LTE speeds, making it the only current T-Mobile device users can upgrade to 4G LTE without buying a new phone. In addition to the Galaxy Note 2, T-Mobile is offering the iPhone 5 with 4G LTE and the Samsung Galaxy S4 release date is set for May 1st on T-Mobile with 4G LTE support.

Each of these devices should deliver similar T-Mobile 4G LTE speeds in areas with 4G LTE networks. 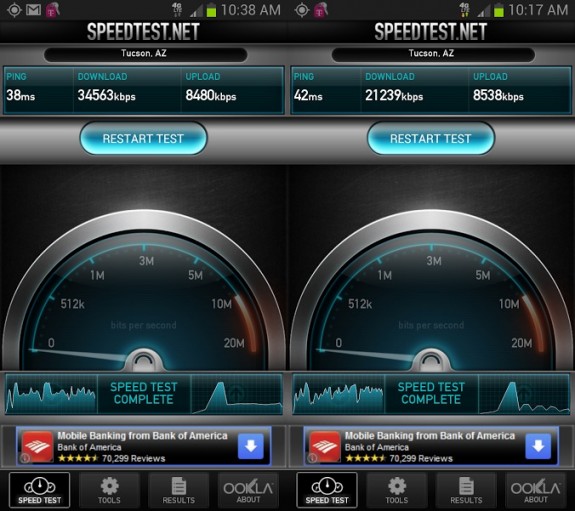 In the same location we compared the results to AT&T 4G LTE which clocked in at 16.9Mbps down and 15.9Mbps up.

T-Mobile is late to the 4G LTE game, but the carrier has bold ambitions. This morning T-Mobile announced that it plans to reach 200 million users by the end of the year. By comparison, Verizon claims to cover 89% of the U.S. population with 4G LTE in 486 markets. AT&T offers 4G LTE in 154 markets, covering 288 million people according to the carrier. Sprint is in third place with plans to reach over 100 markets in the coming months.

T-Mobile 4G LTE coverage is live in the following cities, and it should arrive in New York City soon.

T-Mobile announced a new set of plans today which remove the carrier subsidy and wireless service contract from the equation. T-Mobile is keeping the cost of an iPhone 5 or Galaxy Note 2 down by letting users pay $99 and $199 up front and then $20 a month. Users must pay off the phone, but there is no interest on the payment plan and users can take device somewhere else or upgrade at any time. The T-Mobile iPhone 5 is locked until it is paid off.