A leaked document obtained by T-Mobile blog TmoNews indicates that two mobile wireless broadband routers will be headed to T-Mobile USA in 2011. With AT&T having just recently released its Novatel MiFi–MiFi is a trademark of Novatel and has been used in blogs and by the media as a generic term for mobile broadband routers–T-Mobile is the only major U.S. carrier to not offer a similar device. The carrier has thus far limits mobile broadband to smartphones–via tethering and hotspot apps–and to USB data modems for laptop connections. With the introduction of a MiFi unit–either officially through Novatel or as a MiFi-like device–T-Mobile will also be joining Sprint, AT&T, and Verizon Wireless in offering this class of device. 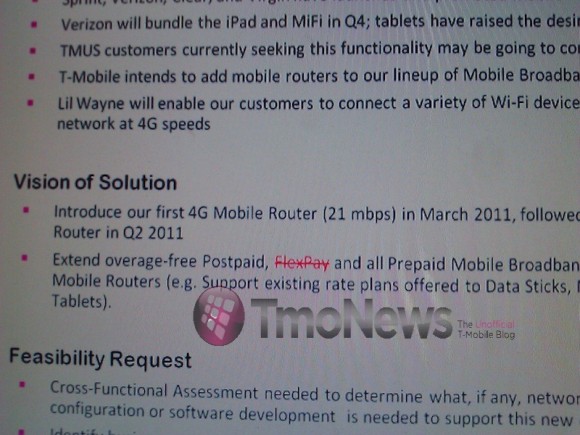 A MiFi or MiFi-like device allows users to connect to a mobile broadband network and share the connection with a number of devices over a WiFi connection. Though the feature had appeared initially in smartphones–Windows Mobile and Symbian devices have long had this feature–it wasn’t until Novatel released its MiFi-branded device that the service became popular. Since then, we’ve seen smartphones running Android, webOS, and iOS (via jailbreaking) adopt the WiFi tethering capabilities, either officially sanctioned through the carrier for a monthly premium charge or unofficially.

The leaked document indicates that T-Mobile USA will be receiving two MiFi-like devices, referred to as a 4G Mobile Router. The first device is anticipated at the end of the first quarter, in March 2011, which will be followed by a second router option in the second quarter.

Given T-Mobile’s theoretical data download speed of up to 21 Mbps, the carrier is branding its HSPA+ MiFi unit as a 4G device.