After we had reported that T-Mobile USA will finally be entering the mobile portable router market that Novatel had popularized with the MiFi come this 2011, a ZTE mobile router was seen at the FCC with T-Mobile’s compatible bandwidths. Engadget had spotted a rendering of the device with a label that identifies the ZTE MF61 as a “T-Mobile 4G Mobile Hotspot” device and is expected to support the carrier’s 21 Mbps theoretical download speeds on its 4G HSPA+ network. 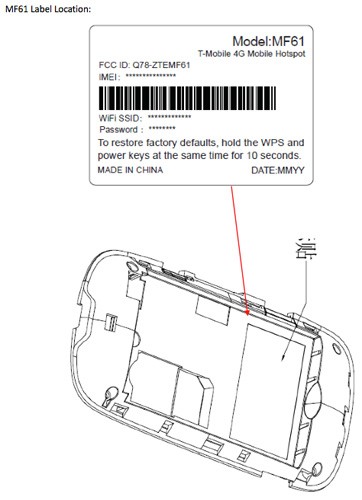 T-Mobile USA is expected to release a mobile outer in the first quarter of 2011 and a second mobile router in the second quarter. The carrier is also expected to increase its 4G download speeds from 21 Mbps to 42 Mbps with an announcement at CES, though newer compatible hardware may be required to take advantage of the new theoretical 42 Mbps download speeds; real-world speeds will be less than what is quoted by carriers as those speeds are under the most ideal testing conditions.