T-Mobile TV is now available in the App Store, bringing a streaming TV option to iPhone users willing to pay the subscription fees.

T-Mobile TV gives users access to content from a wide range of TV channels, including live streaming shows, previously aired shows and clips from shows and new programs. To access most of the content users have to pay a subscription which starts at $12.99 a month. T-Mobile also offers three months of service for $33.99 and six months for $49.99.

Users who download the app get 30 days off free content from Associated Press, Fox News, ACC Digital Network, Saturday Morning TV, Campus Insiders and other networks. The free content only includes clips, however. Users who want live streaming TV will have to pay a subscription. 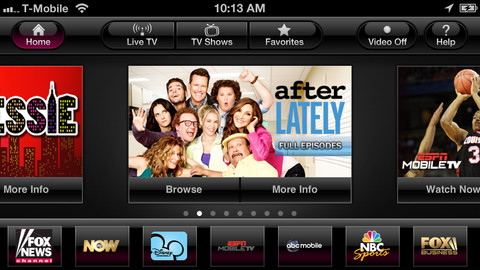 A subscription to T-Mobile TV will give users access to live streams of the sports networks ESPN Mobile TV, NBC Sports and CBS Sports. It also include live news broadcasts from ABC News Now, Bloomberg, FOX News and FOX Business.

The service also gives users to content from network TV stations, ABC Family, MTV, Spike, Comedy Central and VH1 among others. It’s not clear if those stations offer live streams, however. It seems more likely that users can stream shows after they air on the TV stations.

The selection is wider than that of Aereo, and T-Mobile TV is available to more people, but it has it’s own drawback.

Unfortunately for those who might want this to replace a cable subscription, the app doesn’t support AirPlay and the video playback is not that great. The app does work on other carriers, at least the free content does. It might be great for those who really want to stream TV to their phone on the go, but it’s probably not for everyone.