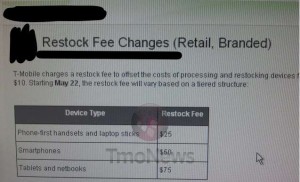 T-Mobile will soon be changing its policy on restocking fees, and the fees will be assessed based on the type of device you own and intend on returning. The carrier currently charges a $10 restocking fee for any device returned if a customer changes their mind. However, that will change come May 22nd when the new policy will go into effect, and smartphones and tablet returns will command a higher restocking fee.

In a leaked system screenshot obtained by TmoNews, T-Mobile USa will charge $25 for USB laptop modems and feature phones, $50 for smartphones, and $75 for tablets and netbooks. Essentially, it will cost more to return more expensive devices to the carrier.

The change in restocking fee will probably ask that customers consider their purchases more carefully before walking out of the store and changing their minds. For comparison, AT&T, at least in the San Francisco, California stores, charges a $35 restocking fee for smartphones.

The fee increases can be also part of the carrier’s strategy to help retain customers.