Announced at MWC, T-Mobile USA announces that it would be the exclusive U.S. partner for the entry-level Lumia 521 smartphone. The Lumia 521 is a variant of the Lumia 520 smartphone for the international market and boasts pretty competitive specs for an entry-level phone. At this time, T-Mobile has not announced pricing or availability for this Windows Phone 8 Lumia, but noted an ‘affordable price’ and ‘4G’ HSPA+ connectivity.

According to Nokia, the Lumia 520 will have a rear 5-megapixel camera that can record 720p HD videos, dual-core 1 GHz Snapdragon processing power, 8 GB on-board storage and micro SD expansion card slot, a 4-inch WVGA IPS display with hardened glass and sensitivity for use with gloves, similar to the display technology on the Lumia 920 flagship, and 512 MB RAM. Noikia says that the camera lens is the same Carl Zeiss lens that’s found on the Lumia 920, though the lower end 520 will lack the excellent and highly praised optical image stabilization mechanism of the higher priced model.

The Lumia 520 will have an estimated price of 139 Euro, or roughly $185, when it debuts, so hopefully T-Mobile will have comparable unlocked pricing for the handset when the handset arrives in the U.S.

The low starting price may be beneficial to T-Mobile, which is looking to end its practice of offering subsidies for handsets in exchange for a two-year service agreement. This would make the Lumia 520/Lumia 521 one of the more affordable handsets in the lineup with decent specs. 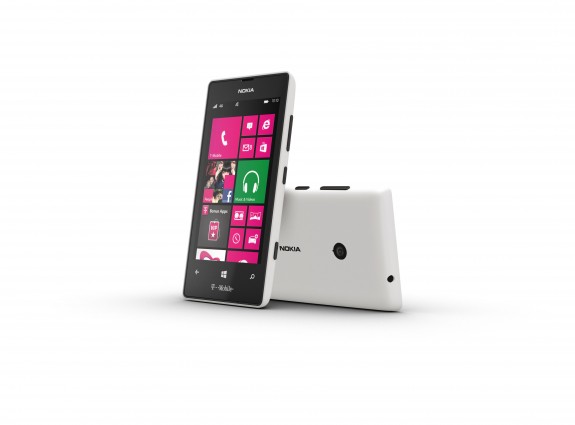 Additionally, the Lumia 520 will debut in five colors, though there was no mention of wireless charging capabilities. Like all Lumia smartphones, the 520 will have access to Nokia’s excellent suite of mapping, navigation, location, and music software, though some of these titles are available on other Windows Phone 8 devices from other manufacturers as well.