T-Mobile’s LG-made G-Slate tablet just saw a drop in price, possibly due to poor sales, and it appears that the carrier is preparing to try and make a big sales push as a leaked document has revealed that the company is now “legally” able to “definitively” say that the G-Slate is two times faster than the iPad 2 and three times faster than its Android counterpart, the Motorola Xoom. 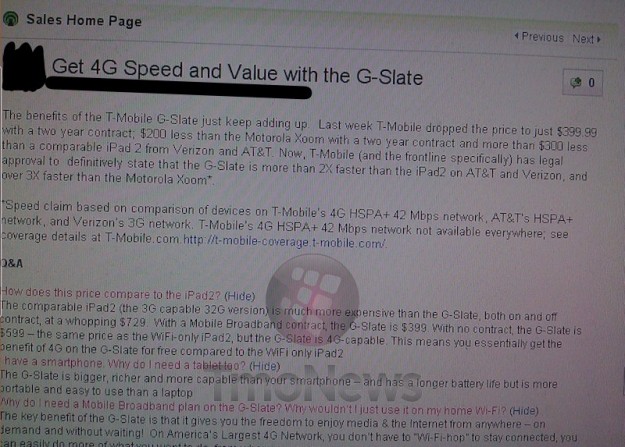 Before you read into this though, you”ll want to know, there is a catch. The basis for T-Mobile’s claim is the carrier’s HSPA+ 42Mbps network which is faster than both AT&T’s 4G HSPA+ and Verizon’s 3G network. And that’s not even the biggest issue with the claim.

The G-Slate can’t even take advantage of the HSPA+ 42Mbps network. In fact, the only device in T-Mobile’s lineup that can is the Rocket 3.0 laptop stick. The G-Slate can only hit 14.4Mbps. Another issue? The Motorola Xoom is supposed to be getting 4G LTE sometime this summer. So, if T-Mobile actually plans on advertising the G-Slate this way, it better do it fast.

So, let’s hope that T-Mobile keeps this lingo stays where it belongs. Behind the scenes. Otherwise, we might have another AT&T on our hands.