We’re still not exactly sure when T-Mobile’s variant of the Samsung Galaxy S II is coming, we only know that it’s coming this fall, but that hasn’t stopped the information about the device from flowing forth to those of you interested in picking one up. Just a short time ago, we got word that T-Mobile’s model would not have the same Exynos processor as the AT&T and Sprint models and today, we get a little more insight into the phone’s form factor.

TMoNews has unleashed a photo upon the world that shows the Galaxy S II posing with the very much official and aging Samsung Galaxy S 4G. Remember, we have yet to get any hands-on time with this device so these leaks are the best thing available to those of you who are interested in how this bad boy will look when released. 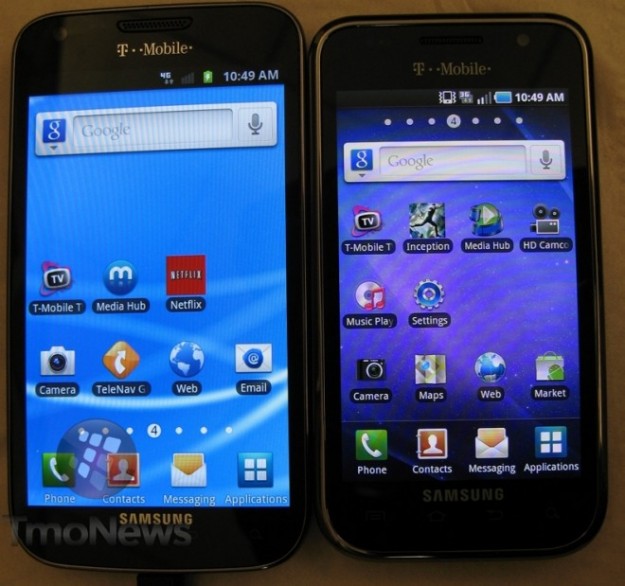 What you see here is a phone whose screen absolutely dwarfs that of the Galaxy S 4G, which is should. The Galaxy S II has a 4.52-inch display. It’s also, well, just a lot bigger than its predecessor.

So, if you’ve ever handled a Galaxy S 4G, you should have a fairly good idea about what you’re getting into. If you haven’t take a trip down to your local retailer and take one for a test drive. It might help.

T-Mobile’s device, along with a massive screen, will likely have a speedy processor and is likely going to be running on T-Mobile’s HSPA+ 42Mpbs network making it one of, if not the most desired Galaxy S II to be announced thus far.