At the end of August, Samsung launched the Galaxy S II here in the United States to great fanfare. Verizon of course took a pass on the device but other major U.S. carriers – AT&T, Sprint and T-Mobile – all unveiled their variants of the popular Android handset at the event. And while AT&T and Sprint gave us specs and a release date, the T-Mobile device got no such information. Instead, it stayed behind glass, leaving T-Mobile customers with tons of questions.

What specs will it have? How much will it cost? When is it going to be released? We have bits and pieces of information but nothing concrete and unfortunately, the T-Mobile Galaxy S II product page that just popped up over at Samsung doesn’t add anything new. 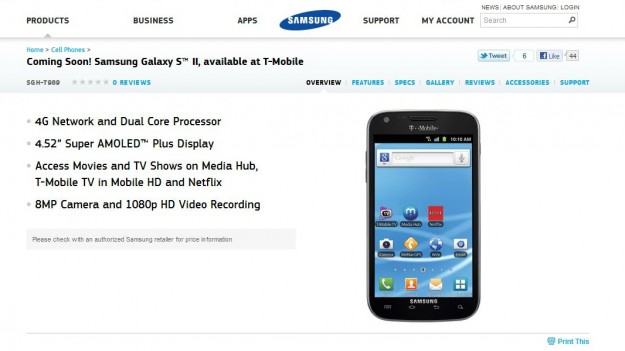 The device is listed as having a dual-core processor with an unknown GHz count, 4G connectivity, a 4.52-inch Super AMOLED Plus display, and an 8MP camera capable of recording 1080p video.

All of that we know.

However, we still don’t know what processor is inside, how fast it is, and if this phone is indeed going to be a 42Mbps HSPA+ device when it arrives this fall. We’ve speculated that the lack of information about T-Mobile’s device is directly tied into its processor and HSPA+ speeds but we still can’t be 100% sure, especially when Samsung and T-Mobile refuse to cough up the goods.

In any event, the fact that it’s appeared in an official capacity is a good sign that things are in motion and hopefully T-Mobile announces the official details and specs sooner rather than later.