In its new image makeover, T-Mobile USA will be updating the image of its prominent and well known consumer-facing spokeswoman Carly, giving her a new leather suit and Ducati motorcycle in lieu of her pink dress. Carly, who replaced Catherine Zeta Jones, was often prominently featured in the nation’s number four carrier’s print and television advertisements promoting the carrier’s fast 4G HSPA+ network. Now, to kick off her new image and a new series of commercial, Carly will throw down her pink dress and open with the ‘No more Mr. Nice Girl’ line in a new TV spot that’s slated to arrive shortly. 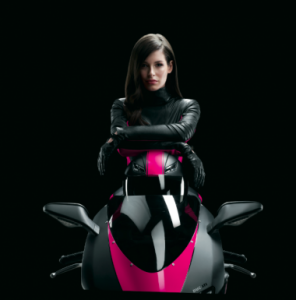 Having previously cited the lack of an iPhone offering as a reason for its loss of customers as well as not being able to perform as well as rivals AT&T and Verizon, T-Mobile is now working on a new campaign to lure in customers. To do this, the carrier is beginning a new approach on refreshing its brand. And a large part of Carly’s new look will emphasize the network’s speed and the speed of the devices in its portfolio. The carrier is planning to increase its advertising budget this year by $200 million, according to All Things D, and this will include TV ads, ‘pre-roll ads on Hulu, and takeover ads on YouTube.’

The carrier will also be launching the new HTC One S mid-range Android smartphone as well on its HSPA+ network as well.