On March 26 T-Mobile will hold an event in New York City to discuss the future of the carrier, where it will likely talk about 4G LTE and its value plans.

According to All Things D the carrier, which dubs itself the “un-carrier,” sent out invitations to the event today. The invite doesn’t give many details on the content of the event. The invite simply says “We’re still a wireless company. We’re just not acting like one anymore.”

The invite seems to imply that T-Mobile will use the event to talk about its new Value Plans which will do away with subsidies and two-year contracts. Instead of tying users down to contracts T-Mobile’s Value Plans as more similar to prepaid plans, users can activate any compatible device and pay for as long as they need the service. 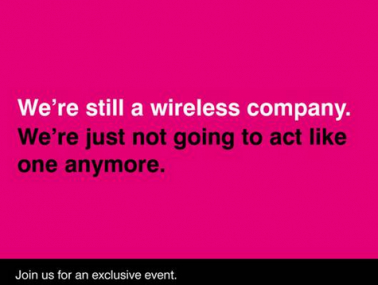 T-Mobile offers Value Plan users the option to either buy a phone at full retail price or to pay it off over 20 months. The plans are cheaper than plans from the other three major carriers, especially if users pay for phones upfront or bring their own unlocked phones to the carrier.

Earlier today T-Mobile announced it will turn on its 4G LTE network later this month. The carrier may use the event in New York City to announce the network’s activation. The carrier previously announced that Las Vegas and Kansas City will get the new network soon, though it hasn’t yet announced any other cities.

There’s also a possibility that T-Mobile will announce the iPhone at the event. The carrier announced last year that it will finally offer Apple’s smartphone this year, but it didn’t announce when it will carry the phone. Using the event to announce the phone doesn’t make much sense given the wording of the invite, however.

It seems more likely that Apple will announce the iPhone on T-Mobile at the launch of the presumed iPhone 5S later this year. The last carrier event for an iPhone launch was the iPhone 4 on Verizon in early 2011. Apple announced Sprint iPhone on stage with the iPhone 4S.