A leaked document indicates that T-Mobile is preparing to offer Nano SIM cards for use with Apple’s new iPhone 5, a device which employs a Nano SIM slot.

TMoNews unearthed a document that appears to show the carrier’s plans to offer the Nano SIM card sometime in mid-October. No device in T-Mobile’s lineup uses a Nano SIM card and no other phone in the U.S. uses Nano SIM so it’s clear that this is going to be aimed squarely at T-Mobile users who wish to bring the iPhone 5 to T-Mobile’s network.

Those who want to get a T-Mobile iPhone 5 up and running in October on T-Mobile’s network will have some options. One of those options is to order an unlocked iPhone 5 which comes with a steep price tag and an unknown release date. 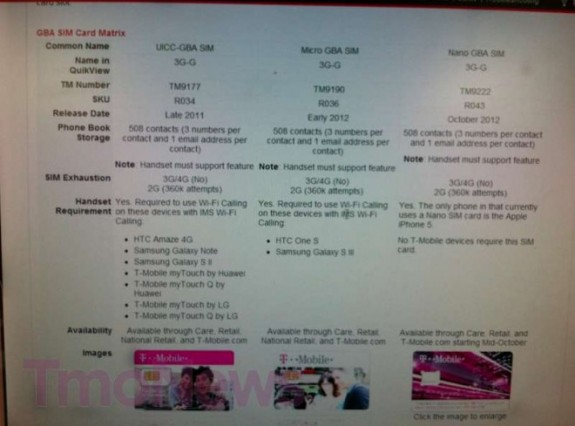 Those looking to get a Nano SIM for the iPhone 5 will be able to get one through T-Mobile in October.

That’s a pretty steep cost but for those that are willing to pay it, T-Mobile’s network awaits. Of course, we don’t know exactly when the unlocked iPhone 5 will be released in the United States. Verizon told us that it will have the unlocked iPhone 5 available on release day, but we’re still unsure if that’s true considering Apple said it wouldn’t launch until a few weeks after September 21st.

Read: Verizon to Sell iPhone 5 Off Contract on Release Date In Stores.

Another option is to buy an AT&T iPhone 5 or a Canadian iPhone 5. As we pointed out yesterday, the network bands that Apple launched with the new iPhone 5 match up perfectly with the ones that T-Mobile is planning for its new 3G and 4G networks.

T-Mobile already began shifting its HSPA+ network to 1900 MHz and the carrier says there will be a much larger footprint by the end of the year. In addition, the AWS spectrum that is supported by the iPhone 5 is the same spectrum that T-Mobile will use with its 4G LTE network next year.

Those line up exactly with AT&T’s network making an AT&T iPhone 5 an option as well.

Anyone going to buy a Nano SIM for use with a T-Mobile iPhone 5?