Apple representatives have been telling people that the T-Mobile iPhone 6 is not unlocked and that they would have to talk to the carrier if they hoped to unlock it. I checked with several T-Mobile sales representatives and each referred us to T-Mobile’s standard unlocking policy, which requires iPhones to be active on their network for at least 40 days before being eligible for unlocking.  That confusion may be because Apple isn’t advertising the device as “T-Mobile iPhone 6 unlocked,” but just as being a contract-free device.

I’m happy to report that all the representatives I spoke to provided inaccurate information and that the T-Mobile iPhone can be used with AT&T and Verizon  right out of the box. Many pre-paid networks, such as Straight Talk, utilize AT&T’s network and will work with the T-Mobile iPhone 6 as well.

In the above demo I place a call and browse with Safari on T-Mobile, AT&T and Verizon SIM cards in the same phone. That means a lot of flexibility for those who aren’t sure if they want to be on the same carrier for the next two years or not.

I did run into some trouble with our test Sprint SIM card. Before recording the above video, the Sprint SIM card successfully connected to Sprint’s 4G LTE network and loaded several Web sites in Safari. However, I could not place calls with it. In the video you can see that the iPhone 6 displays an activation error. When I pulled the Sprint SIM out of the T-Mobile iPhone 6 and put it back in a Sprint iPhone 5s it worked fine.

The Verizon iPhone 6 is also factory unlocked, but I haven’t had a chance to try it with SIM cards from all four networks. It does work fine with  AT&T SIM cards.

There is a price to pay for the flexibility of the unlocked T-Mobile iPhone 6 however. Apple only sells the T-Mobile iPhone 6 at full-price. That means you’ll have to pony up $649 to $849 rather than the commonly advertised $199 to $399. That’s because wireless carriers traditionally offer $450 subsidies to customers in exchange for two-year service commitments. The industry is moving away from this model and asking customers to pay full price for iPhones in exchange for lower monthly service fees. Carriers typically offer payment plans to spread the full cost of the phone out over a year or two. The only way to get the unlocked T-Mobile iPhone 6 from Apple without paying all that money upfront is to apply for a Barclaycard at the time of purchase. 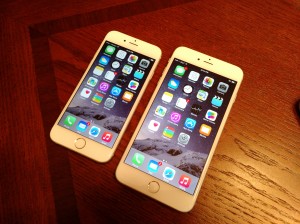 T-Mobile’s is aggressively pursuing AT&T, Sprint and Verizon subscribers and will even pay off their Early Termination Fees (ETF) if they switch. Early termination fees can cost hundreds of dollars and are basically a way for carriers to recoup the cost of selling subsidized phones when subscribers leave before their two-year commitments are up. These fees are what often prevents subscribers from leaving carriers and switching to another. T-Mobile’s family plans can be significantly cheaper than Verizon’s or AT&T’s. While switching to a low-cost carrier like T-Mobile is certainly inviting,  some T-Mobile subscribers complain of poor reception. Thanks to the full-priced T-Mobile iPhone 6 being unlocked, switching back is less of a chore and you won’t have to re-buy new iPhones for yourself and others on your plan.

Apple’s latest iPhone series is its most popular yet. The company reported that it sold more than 10 million units in the first three days of it hitting store shelves. You can read more of our iPhone 6 coverage here.