T-Mobile iPhone 6, iPhone 6 Plus Nearly Impossible to Find at Stores

A stock check San Francisco showed that zero T-Mobile phones were available today. There were plenty of AT&T, Sprint and Verizon iPhone 6 units available at all three San Francisco Apple stores, though some sizes and colors were unavailable. According to Apple.com, the T-Mobile iPhone 6 was not available for pickup in the 20 Apple Stores closest to San Francisco. 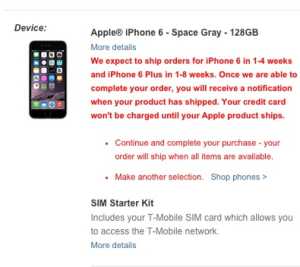 We called 10 T-Mobile retail stores in and around San Francisco and none had an iPhone 6 or iPhone 6 Plus in stock. T-Mobile retail salespeople consistently told us that they had no idea which models would be in stock soonest and all but one store stated they would be sold on a first-come, first-served basis. One T-Mobile retail location had a wait list, but did not tell us how many people were on it.

So why are T-Mobile phones in such short supply?

T-Mobile’s aggressive service plan pricing, trade-in program for older iPhones, and its “Uncarrier” marketing campaigns are drawing new subscribers. T-Mobile’s pricing structure, especially for families, is cheaper than its larger rivals. For example, T-Mobile is running a promotion that includes unlimited text, talk and data (10GB at 4G LTE speeds) for just $100. That would be a pretty good value for a single line compared to Verizon and AT&T, but the $100 plan actually covers four lines with no overages. Instead of charging customers extra for data with this plan, lines are throttled down to 3G speeds if the four lines go over 10GB per month.  In addition, T-Mobile offers those switching from other networks up to $350 to take care of competitors’ early termination fees. 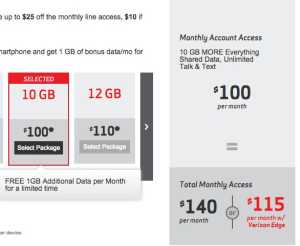 By comparison, a single iPhone 6 line with 10GB of data on Verizon Wireless costs $140 per month if you buy the device outright or on a two-year contract ($199 for the 16GB iPhone 6) . The same level of service costs $115 per month when paired with a Verizon Edge payment plan, which spreads the full cost of the iPhone 6 over 20 months.

The T-Mobile iPhone 6 and iPhone 6 Plus are locked to the wireless carrier’s network, regardless if you buy them from T-Mobile or Apple. That means they cannot be used on other networks straight out of the box. However, T-Mobile will unlock any iPhone 6s after it’s been in service for 40 days and it’s been fully paid off if it’s on a payment plan. T-Mobile also offers international travelers free texting and data while in 120 countries, though the data is limited to 3G speeds.

We’ve received several complaints of eager T-Mobile customers frustrated by the iPhone 6 purchase process. T-Mobile took more than three-hours to begin selling iPhone 6 pre-orders on September 12. The Apple Store app does not allow shoppers to order T-Mobile iPhones, instead directing them to the full Apple.com store. Apple faced its own delays in the early morning hours of September 12. The result is that those who carefully planned their T-Mobile iPhone 6 purchases may be waiting for weeks until they can get their own iPhone 6s.

The iPhone 6 and iPhone 6 Plus are Apple’s latest smartphones. Both are significantly larger than previous iPhones and are spurring many customers to upgrade. You can watch an intro video to the iPhone 6 above or follow all of our iPhone 6 coverage here.