T-Mobile, AT&T, and Verizon are now offering competitive plans that supposedly free you up from a long two-year contract. In lieu of a contract and phone subsidies, you’ll end up paying full retail price on your next smartphone with convenient interest-free financing, but will any of these new programs capture your interest?

Down payments, monthly payments, service plans, fees, and insurance are complicated enough as it is, but when you add it all together, it could be even more unnecessarily complicated for consumers to try and decipher. We’re going to try and give you a complete picture of what you’re paying if you were to upgrade to one of these Jump, Next, or Edge plans and what’ you’re expected to pay. For the sake of convenience, we’re going to standardized on plans that offer unlimited talk and text and about 2 GB of data.

Let’s break it down to see what T-Mobile Jump, AT&T Next, and Verizon Edge offer and how the plans stack up.

The Big Picture of Costs 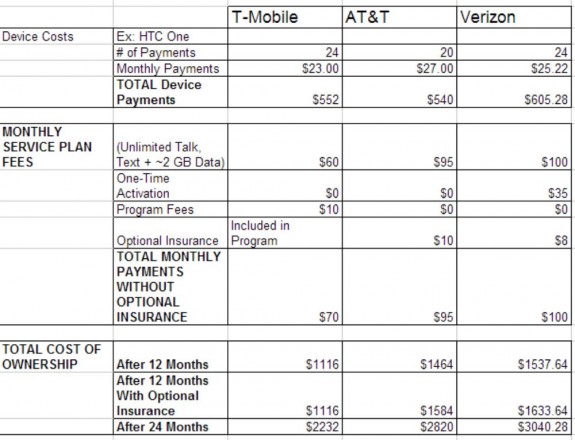 T-Mobile offers somewhat cheaper monthly plans than its bigger rivals, and the number four largest U.S. carrier also offers unlimited data packages, which will be good for smartphone owners looking to take advantage of T-Mobile’s expanding 4G LTE footprint in the States and not have to worry about data caps, overages, or throttling.

With a small down payment, T-Mobile’s UNcarrier initiative asks its customers to finance their phones over a 24-month period.

For this cost comparison, we’ll use the HTC One smartphone, which is now available on all four major U.S. carriers.

To participate in JUMP, in addition to the device cost, T-Mobile assesses a $10 start-up fee, which includes the cost of the SIM card to set up your line of service with its network. It’s similar to an activation fee, but isn’t labeled as such.

Then, there’s the JUMP plan. This goes for a cost of $10 per month and includes handset protection. Essentially, it’s insurance for your phone and if you lose or damage your phone, T-Mobile will replace your phone for you. If your phone is damaged, a $5 processing fee will be assessed for each claim while loss or theft of the device is leveraged a deductible of $175 for the replacement of your handset.

T-Mobile is also the only carrier that we’re comparing today to offer an unlimited data plan. And given that unlimited data is just $10 more per month over the standard 2.5 GB of data, we calculated T-Mobile’s cost of ownership in this section using the $70 unlimited plan, though you do have to add in the $10 per month Jump fee.

With the JUMP plan added to your account, you can upgrade every six months. After 6 months on the program, then users can upgrade to the next handset.

Bear in mind though that when you do upgrade, you’ll have to return your old phone to T-Mobile so you can’t keep it as a backup phone or to re-sell. It’s essentially like leasing a car and qualifying for a new lease early.

AT&T’s Next program is aimed to compete with T-Mobile’s Jump program and AT&T Mobility became the second wireless carrier in the U.S. to offer a plan that offers early equipment upgrades without the need to sign a two-year contract. Unlike T-Mobile, AT&T requires no money down and the carrier offers interest-free financing.

AT&T allows you to take advantage of its Next program in a number of ways. You can either sign up for individual plans or through the carrier’s Mobile Share Data plans. Additionally, if you have a corporate discount with AT&T, NEXT monthly plans will continue to be discounted at the same rate.

AT&T will allow users to upgrade every 12 months or every year through the Next program. And like Jump, once you upgrade, you’ll have to hand over your existing device so you don’t get to keep your old phone. When you do upgrade to your Next handset, you’ll restart your device payments based on the new phone that you’ve selected following the 20-month payment calculations.

Does Verizon’s Edge edge out T-Mobile and AT&T? Verizon’s program seems to be a hybrid of AT&T’s and T-Mobile’s program, taking a little from Jump and Next and adding in Verizon’s large 4G LTE footprint. 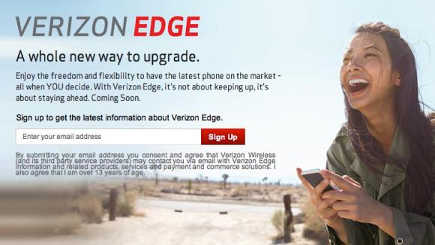 Interestingly, according to Verizon’s Edge FAQ, you do have to sign up for a 24-month Edge Agreement, “however a long-term service agreement isn’t required.” The language is definitely confusing, but likely this means that you do have to be signed in to Verizon for a minimum of twenty-four months, or the length of time your phone’s payment is divided into.

Like T-Mobile, Edge’s payments are divided into twenty-four months. There is no down payment, but you do have to pay an activation fee. And like AT&T, insurance is optional, rather than built-into the Edge plan. This means that if you opt not to get insurance and something happens to your phone, you’ll have to pay it off or continue to make the monthly payments until it is paid off before you can Edge up to a new phone.

Verizon charges a $35 activation fee for its Edge program and the monthly cost, at roughly $100 per month, seems a bit on the high side as Verizon, unlike rival AT&T Mobility, doesn’t offer individual plans anymore. Verizon will force you into a Share Everything Plan regardless if you have a single line or multiple lines so you’re paying for your voice, text, and data monthly fee ($60) plus the privilege of using the device on that plan per month ($40).

Though you can upgrade every six months on T-Mobile and Verizon, we’re going to standardize our comparison at the 12-month mark as it seems more logical given that’s where AT&T stands and on Verizon, despite the 6-month upgrade eligibility you’d still have to make at least 12 months worth of payments (50 percent of the cost of the device) to qualify to upgrade anyways.

So with 12 months of payments on both the device and the monthly plans, along with activation and program fees, you’re looking at paying $1246 on T-Mobile, $1164 on AT&T, and $1538 on Verizon. This doesn’t include any taxes, fees, or other charges.

If you’re adding insurance on AT&T and Verizon, you’ll have to add $120 and $96 respectively to get comparable protection to what T-Mobile is offering in its pricing that we’re quoting above. That brings us to $1246 on T-Mobile, $1284 on AT&T, and $1634 on Verizon.

No matter how you break it down, T-Mobile’s unlimited everything is a great value and given you’re getting so much from T-Mobile, the break-down at 12 months is still lower than the breakdown for seemingly comparable plans on AT&T Mobility and Verizon Wireless. On AT&T, you’re getting 250 minutes and 3 GB of data for an individual plan with no text for $70. Unlimited texting comes in at $20 per month extra. AT&T’s Mobile Share Plan with unlimited talk and text along with 2 GB of monthly data comes in at $95 per month for a single line. AT&T offers flexibility here for those who may want to keep their costs down if they don’t talk or text much. On Verizon, you’re only getting the carrier’s Share Everything plans and there are now no options for individual plans. For $100 on Verizon, you do get 2 GB of data and unlimited talk and text.

What You’re Giving Up to Gain Contract Freedom:

Freedom from a contract comes at a cost, and T-Mobile made that abundantly clear in its UNcarrier announcement. On all three carriers, you won’t get any device subsidies to have that freedom. However, T-Mobile says that going with its network will also mean cheaper plans. As T-Mobile doesn’t have to subsidize your device costs–you’re paying full price for your smartphone over time anyways–you’ll be saving money on the monthly wireless service plans and this is why T-Mobile says it could offer its customers a $70 inclusive unlimited everything (without tethering) plan.

On the other hand, the cost of going contract-free with AT&T and Verizon are high. Essentially, you’re trading in your device subsidies for the privilege of freedom while at the same time paying for the exact same plans every month as those who agree to a subsidy. Slice it any way you want, but you’re just giving up some savings–which could amount to a few hundred dollars–in subsidies that either carrier would offer if you had chosen to sign a two-year deal. So in the end, you’re paying more for doing business.

And though you’re theoretically not bound by a contract from these carriers, you still are “committed” to them, at least until your phone is paid off. And given that all these carriers have a payment schedule distributed over 20 or 24 months, you’re essentially still in a two-year deal with these carriers, unless you make a lump sum payment to pay off your phone.

However, the privilege here is more frequent upgrades, which could amount to a new phone every 6 or 12 months without the hassle of having to pay full price ahead of your upgrade eligibility under the old wireless way of doing business, or even having to sell or trade-in your phone. Here, upgrades are automatic after 6 or 12 months depending on your choice of carrier and the process is seamless like leasing a car and trading your old lease for a new lease. You theoretically don’t own your phone when you trade up, unless of course you choose to pay it off.

Though the option to upgrade sooner (6 months on T-Mobile’s Jump and 6 months with 50 percent of your device’s cost paid off on Verizon’s Edge), another important factor to consider is data speeds, coverage, and availability of 4G LTE. All four carriers now offer a comparable selection of high-end smartphones (Moto X, Apple iPhone, Samsung Galaxy S4 and Galaxy Note 2, LG G2, HTC One, and more), but coverage and data speeds vary drastically.

Verizon has the largest coverage footprint and it has almost blanketed its entire 3G coverage map with LTE coverage. This is quite a robust rollout of its LTE network, but it comes at a cost as LTE speeds are somewhat slower than AT&T’s and T-Mobile’s speeds.

AT&T has the next most robust LTE coverage footprint and offers some of the fastest speeds in the nation. Where LTE isn’t available, AT&T will fall mack to HSPA+ 21 Mbps. The 21 Mbps HSPA+ contingent network is still plenty fast.

T-Mobile, which is rapidly trying to catch up with LTE coverage has the smallest LTE footprint. However, T-Mobile does have some of the fastest HSPA+ 42 Mbps backup network in areas without LTE. Those HSPA+ speeds are pretty comparable to some slower LTE networks and still will get the job done in less time than you’d think when you’re pulling up web pages or watching videos over the Internet.

Then, there’s also unlimited data. If that’s a concern for you, T-Mobile is the only carrier of the ones we’re comparing today to offer unlimited data. And thankfully, T-Mobile’s data network, despite its unlimited offering, is no slouch where speeds are concerned. You’ll just have to find LTE coverage for faster speeds, which is more limited in area than the LTE coverage maps of rivals AT&T and Verizon.