There is now a new leaked launch schedule for T-Mobile USA’s network, but unfortunately the leak doesn’t make mention of which devices are launching when. The leaked information obtained by TmoNews reveals launch dates of October 15th and 19th along with a potential new tablet launch.

According to TmoNews, “October 15th is scheduled as a major release release giving us hope that either the HTC Ruby or Galaxy S II has been moved up from the earlier rumored date of October 26th.” 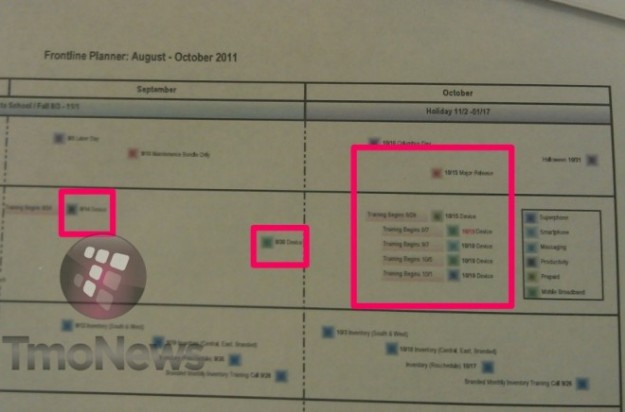 Another high profile smartphone launch, according to Phandroid, is the iPhone 5 for T-Mobile. The carrier had issued an ‘all hands on deck’ day on September 24th, though that may likely be a training day for the Samsung Galaxy S II for the carrier, which had been known in earlier leaks as the Samsung Hercules.

There’s also a launch date in September, which is rumored to be for the BlackBerry Curve 9360 on September 14th.