Based on current rumors the iPhone 5 is almost here for Verizon, AT&T and possibly Sprint, but it looks like T-Mobile subscribers will have to wait for the iPhone 5.

TmoNews shares an internal email summarizing a town hall event from September 15th in which Cole Brodman, Chief Marketing Officer at T-Mobile, reportedly told attendees, “We are not going to get the iPhone 5 this year” 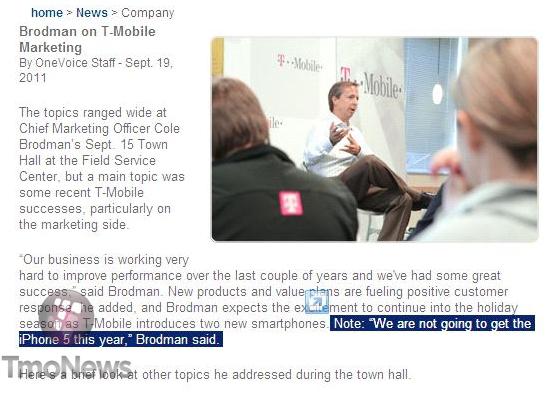 T-mobile says no iPhone 5 this year.

T-Mobile has been missing from most iPhone 5 rumors, and it appears that this might not be due to secrecy, but a lack of T-Mobile iPhone plans.

Compared to Sprint’s comments, or lack thereof, on the iPhone 5, Brodman’s statement doesn’t leave much to the imagination.

While many T-Mobile customers have been hoping for the iPhone 5 to land on T-Mobile, things aren’t looking good at this point. The ongoing AT&T aquisition and lawsuits to prevent it may have convinced Apple to avoid the additional expenditures required to engineer and produce an iPhone 5 version that would work on T-Mobile.