T-Mobile Nexus 5 Available Today for $42 Down

For those of you who’ve been waiting for a Nexus 5 to be delivered from the out of stock Google Play Store, shipping delays and all, another option might be to grab one from T-Mobile. The overall price will be more, but starting today customers can get the new Nexus 5 from T-Mobile online for as little as $42 down, and monthly payments.

Following the recent UNcarrier move by T-Mobile, devices are sold without the 2-year contract and $199 pricing we usually see. Instead a $42 down payment will get you the Nexus 5 (16GB) for T-Mobile, and monthly payments of $17 on top of your smartphone plan is all that’s needed. In the end you’ll be paying $450 for the device, but those on T-Mobile who’d rather not wait for the Play Store, here’s your chance. 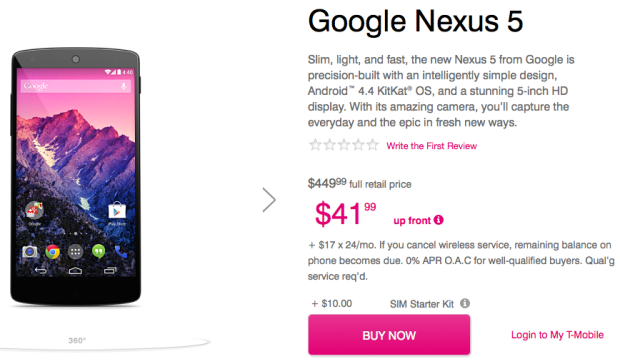 The 16GB Nexus 5 on the Google Play Store is sold out, and shipping delays are stretching 4-5 weeks or more. Which means you may not receive the device until midway through December if you order today. As a result, the Nexus 5 from T-Mobile will end up costing users $450 instead of $350, but that will be over a 24 month period of monthly payments, instead of a lump sum.

Considering you’re getting the new Nexus 5 with Android 4.4 KitKat for just $41 initially, the extra over a 2-year period could be worth it to many who can’t afford to purchase the device outright. Add on the fact that this time around we have full support for T-Mobile 4G LTE speeds, and it’s quite the deal.

At the moment the Nexus 5 for T-Mobile is only available online, but starting November 20th you’ll be able to walk in and get the device right from a store nearest you. Just like the Nexus 4 last year, we have a feeling T-Mobile stores stock will be limited, and probably sell out quite fast. However, the price isn’t too bad for those who’d like to get it now, rather than wait 5 weeks for Google Play to ship their purchase.