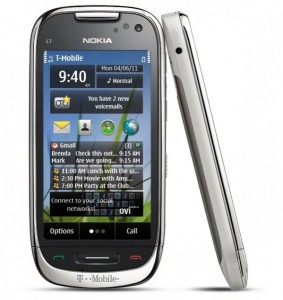 Yesterday at CTIA, Nokia and T-Mobile announced the United States version of the Finnish companies C7 handset, a device called the Nokia Astound, which offers great price points both at the hardware and data plan levels.

T-Mobile is going to be offering up the device for a mere $80 when it hits shelves on April 6th and it will be attaching a $10/mo for 200MB data plan along with it.

We were able to go hands-on with the Astound yesterday and found it to have that quality form factor and design that usually can be found with Nokia-made phones. It also felt faster than Nokia’s flagship N8 which the company attributes to it running a newer version of Symbian^3.

Overall, at the price point, it’s a definitely a worth a look when scouting for a new phone, especially for those that want a new phone on the cheap — and a data plan to match.

Update: T-Mobile has told us that there is also an unlimited plan for the Astound that comes in at $30/mo on top of a voice plan.