T-Mobile Not Taking iPhone 6 Pre-Orders Yet 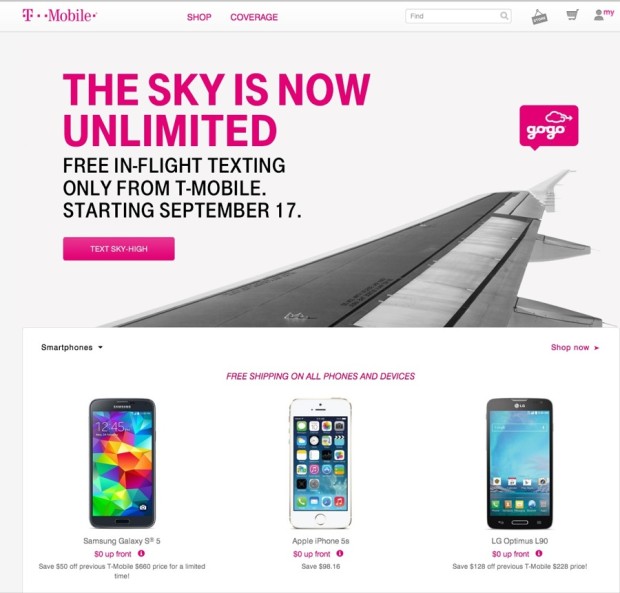 The iPhone 6 is missing from T-Mobile.com on the iPhone 6 pre-order launch day

While Apple, Verizon, T-Mobile and Sprint are all doing their best to keep up with iPhone 6 pre-order demand, T-Mobile simply has a pre-register form on the iPhone 6 landing page. The form simply asks for visitors’ contact info and if they’re already a T-Mobile customer. There’s also a tab on the landing page that lets users compare iPhones and look at the specs, but there’s no buy button anywhere. 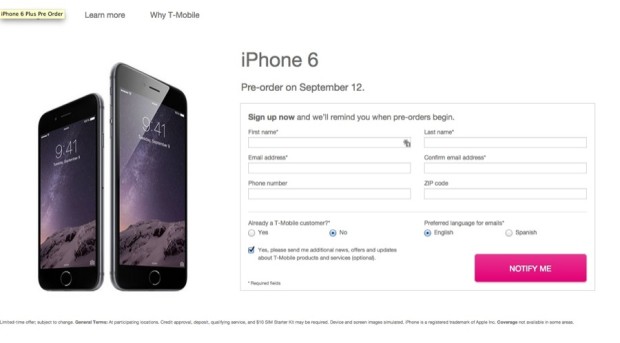 T-Mobile will take your info, but not your iPhone 6 order…yet

Those looking to buy the T-Mobile version of the iPhone 6 or iPhone 6 Plus from the Apple Store App are also out of luck. That app will only allow customers to order iPhone 6 if they are upgrading a phone line on AT&T, Sprint or Verizon.

Though it’s over an hour past the official iPhone 6 pre-order launch time, Apple.com is still not loading for many iPhone 6 shoppers. Instead, they’re greeted with a message telling them that the Apple Store will be back soon. While Apple.com is down, AT&T, Verizon and Sprint customers have been able to place iPhone 6 pre-orders with varying degrees of success.

Update: It appears that at least some T-Mobile customers are indeed able to place their iPhone 6 pre-orders, but at Apple.com, not T-Mobile.com.

I got the Apple Store US Website to work for a minute and got my T-Mobile device order placed successfully. pic.twitter.com/eYuTxqXRGs

Twitter is ablaze with people complaining about T-Mobile’s mis-handling of the iPhone 6 launch.

Seriously, @TMobile, way to massively botch your iPhone 6 launch. I’m not amused right now and neither are thousands of others.

T-Mobile’s been branding itself as an “uncarrier” lately and one Cnet editor had this to say on Twitter:

T-Mobile isn’t the only wireless carrier having issues with the iPhone 6 pre-order rush. AT&T was having significant slow downs and reports of orders not completing. Verizon Wireless had issues matching customer info, preventing many users from completing their iPhone 6 orders.

This is the first time Apple’s launched two all-new iPhones at the same time. For the first time, Apple customers have a choice in screen size and are able to buy iPhones with up to 128GB of storage. The iPhone 6 starts at $199 with a two-year contract. The iPhone 6 Plus starts at $299 with a carrier contract. In both instances, carriers are offering $450 subsidies. Those who aren’t eligible for discounts need to pay the full price of the iPhone 6, which starts at $649, or sign up for a carrier payment plan, such as AT&T Next.

Read our full breakdown of all the iPhone 6 pre-order problems here.